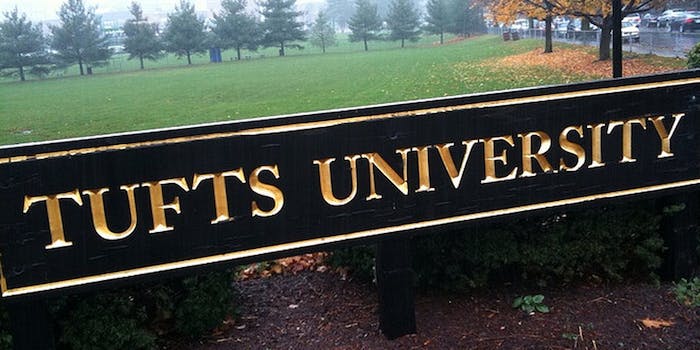 Tufts University of Swag adds “YOLO” to its application essay

Remember when your college application asked you to compare a Robert Frost poem to a struggle you overcame in life?

Twitter hashtags have made their way into the college application process. Remember when you had to answer long essay questions about literature and art, comparing a Robert Frost poem to a struggle you overcame in life? That’s not swaggy!

The ancient Romans started it when they coined the phrase “Carpe diem.” Jonathan Larson proclaimed “No day but today!” and most recently, Drake explained You Only Live Once (YOLO). Have you ever seized the day? Lived like there was no tomorrow? Or perhaps you plan to shout YOLO while jumping into something in the future. What does #YOLO mean to you?

Oh wow. Let’s not forget, they’re pulling “YOLO” from a Drake and Lil Wayne collab called “The Motto,” which contains the beautiful lyric “Drowned in the pussy / so I swam to her butt.” But you know, this will decide what caliber of person gets into your school! Whatever! YOLO!

Tufts has kind of always taken a YOLO approach to applications. In 2010, it asked students to submit YouTube videos about themselves, and to create something out of a blank piece of paper.

“Seize the day” is certainly not a new concept, and college application questions are always sort of a weird stretch, but it’s depressing to watch a university dumb itself down for a new generation, like a dad coming in to a sleepover and asking if anyone likes “Justin Beefer.”

Feel kind of bad for that kid who still… you know, reads books. Better get on Tumblr before you’re a child left behind.