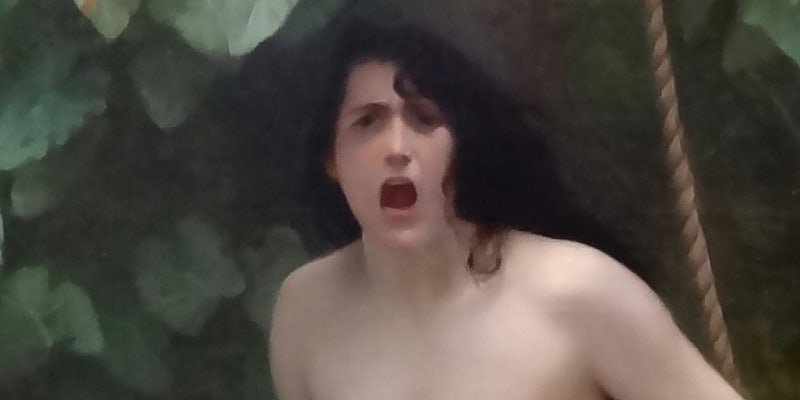 How a 19th century nude painting became a feminist meme

The nude painting of 'Truth Coming Out Of Her Well To Shame Mankind' struck a chord with women online.

Like many people, I first saw “Truth Coming Out Of Her Well To Shame Mankind” on Tumblr. Painted in 1896, it depicts a naked woman climbing out of (obviously) a well, looking unkempt and either anguished or enraged. It’s not a particularly famous painting, but it’s become a touchstone in certain corners of the internet.

French artist Jean Léon Gerome portrayed “Truth” staring angrily out at the viewer, avoiding the sultry coyness of your average historical nude. She looks like she means business, and intentionally or not, she’s now the 19th century equivalent of a feminist reaction gif.

Allegorical nudes are a predictably popular subject throughout Western art. They’re a thinly-veiled excuse for men to paint naked girls, often retelling a Greek myth or Biblical tale where some woman’s dress conveniently falls off. You can just imagine Renaissance artists combing through the Bible to find characters like Susanna, who attracted the attention of lecherous old men while bathing, or Lot, who was seduced by his own daughters and thus provided the opportunity to paint two debauched young women at once.

It’s a little risqué to paint a straightforward nude with no literary subtext, but if the woman in question is a mythological figure or she represents the abstract concept of Love or Liberty, you’re safe. “Truth” is one such character, but Gerome’s version is noticeably different from her peers.

There’s a longstanding trope of Truth appearing alongside her protector Time, with Truth portrayed as a passively nude woman, and Time as a scythe-wielding old man. “Truth Coming Out Of Her Well To Shame Mankind” is basically the opposite of this image. This vision of Truth is aggressive and un-decorative, making her a lot more relatable than the silent beauty of other allegorical nudes. Even the painting’s title is badass, suggesting a disgruntled Truth dragging herself out of bed to deal with some mansplainers.

“Truth” gained traction on Tumblr, achieving meme status by being thoroughly memorable. Her popularity follows a couple of longstanding traditions: critics reinterpreting historical art through the lens of contemporary politics, and internet denizens remixing highbrow art into a kind of fandom in-joke. (See also: Tumblr’s obsession with the Edgar Allan Poe short story The Cask of Amontillado.) In a world where women’s bodies are routinely packaged for male consumption, “Truth” seems reassuringly rebellious, human, and raw.

The painting’s title has been added to photos of the rockstar Laura Jane Grace, a cursed image of a disembodied leg emerging from a toilet, and screencaps of Sasha Velour from Drag Race. It’s been repurposed for weird Mario fanart, Wonder Woman gifs, and Beyonce lyric edits. As it turns out, the naked Truth is surprisingly versatile, equally suited to feminist commentary and absurdist humor.

Back in 1896, Jean-Léon Gérôme probably didn’t intend this painting as a comment on gender. Inspired by a quote from the Greek philosopher Democritus, it may refer to the rise of photography in the late 19th century, allowing “truth” to be seen more clearly. Or, it could follow in the footsteps of a similar painting Gérôme completed the year before, illustrating the battle to find the truth in a famous military scandal at the time.

Whatever the painting’s original meaning may have been, the internet decided to ignore it with aplomb. The naked truth has re-emerged as a symbol of female anger and messiness, and long may she reign.