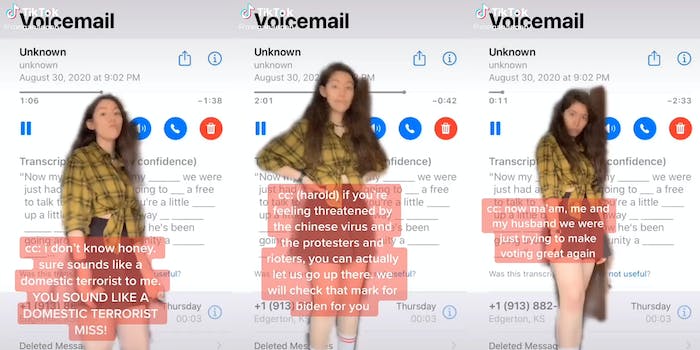 The couple allegedly called repeatedly, trying to understand why she would vote for Joe Biden.

A woman on Tiktok posted now-viral videos, including alleged voicemails from Republican canvassers, and the messages sound a lot like voter intimidation.

@meganannnn is a 19-year-old “thespian lesbian,” according to her page bio. She has over 15,000 followers.

In the first video, the caller says, “Now ma’am, me and my husband, we were just trying to make voting great again. We do apologize if we rattled your socks up a little in any type of way.”

They explain that “everyone except you has been voting for Donald J. Trump,” and ask, “now honey, why do you think this beautiful young lady would vote for Joe Biden.”

Then, in the second video, the wife openly accuses her of treason: “You sound like a domestic terrorist to me, miss.” Then, they wanted her to call back to explain to them why she would vote for Biden.

Things take a triple-whammy turn for the cultish, racist, and nonsensical during the third video. Harold, the husband caller, claims: “If you’re feeling threatened by the Chinese virus and the protestors and rioters, you can actually let us go up there. We will check that mark for Biden for you.”

The wife responds: “Oh, you are so good, honey. That is so good of you. That is so Christian of you.”

She followed up with a brief explainer video, saying that on the first call, “Harold” had already slandered her as a “domestic terrorist” when she said she would be voting for Biden. They would call back multiple times, which is what she used for her TikTok. She also asked for advice from any attorneys who might see the videos.

The video also went viral on Twitter, where people wondered how the couple could deviate from what’s usually tight scripting as phone bankers.

“What in the hell kind of campaign call is that? I thought most campaigns have a strict script for callers to follow—and if the person they reached said they were voting for another candidate, the caller should just say ‘thank you for your time’ and just hang up,” a Twitter user replied.

Some are saying the TikTok videos are put-ons to capitalize voter suppression issues in various states.

“This seems fake. No southern accent sounds like that, and the call came from an “unknown number,” so conveniently there is no way to verify if it’s real. GOP voter suppression is real, but this girl is doing this for TikTok views,” another Twitter user responded.

Voter intimidation and suppression appear inevitable, given the mounting evidence.

Politico‘s reporting found that the Trump administration was considering employing executive actions to inject itself into the election process as an avenue to circumvent states, including discovering means to make it harder for people to vote by mail.

However, the videos were both a gas for viewers, particularly about “Harold” being upset and using “sassy pants” as a term in 2020.