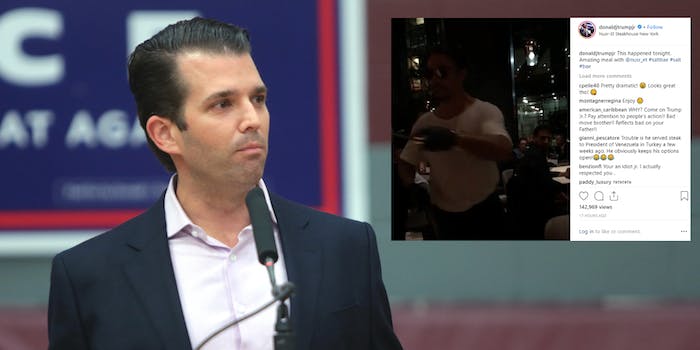 Trump Jr. has a history of enjoying Salt Bae.

Donald Trump Jr. is the latest person to be served by Turkish chef Nusret Gökçe, also known as Salt Bae, and it’s caused a stir online as well.

Last month Gökçe came under fire after Sen. Marco Rubio (R-Fla.) called him out for serving Venezuelan president Nicolas Maduro at one of his restaurants.  The senator called for a boycott of the chef’s restaurants and the video sparked an intense backlash online.

On Thursday the president’s son posted his meal on Instagram, where the chef did the same salt sprinkling that shot him into viral fame last year.

At the end of the video, Trump Jr. seems excited about eating.

“Looks good man!” the president’s son says to the chef.

Trump Jr. is clearly a fan of Salt Bae. Earlier this year he posted a meme of the chef that looked like his father, President Donald Trump. In the post, he said his father was “Freedom Bae” who was “just sprinkling a bit of freedom for all of us to enjoy this #independenceday weekend.” He also once compared himself to Salt Bae after a number of memes of him made the rounds online in March 2017.

While the president’s son may have been excited to eat his steak, the appearance with Salt Bae after the chef’s criticized meal with Maduro was not met well with people online.

“Your an idiot jr. I actually respected you,” another one wrote.

“Jr, I support your father, you shouldn’t be supporting or giving props to a man that admires dictators! And this post is still up???? An apology is in order.”

@marcorubio Marco I’m stuck in the hurricane but don’t worry about me. @DonaldJTrumpJr went to the salt bae. Please care about this as much as you did the last guy