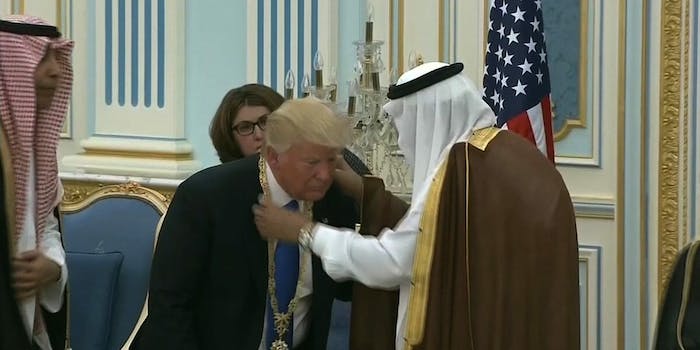 Was it a bow? A curtsy? An admission of hypocrisy? Who really knows!

Did President Donald Trump bow or curtsy to the Saudi Arabian king? Either way, the internet is having a field day with Trump’s second bout of social media hypocrisy during his trip to Saudi Arabia.

On Saturday, Trump supporters and Fox News praised Trump for his greeting with Saudi Arabian leaders—instead of bowing, much like President Barack Obama did in 2009 to then-leader King Abdullah in London, he gave the king a handshake.

Trump greeted by Saudi in most elaborate welcome in their history.
Obama was forced to bow in mud room entrance pic.twitter.com/fwzpdVOn6F

How about that! Trump shook hands but didn't bow!! That's what an American President should do. #RiyadhSummit https://t.co/hs2xUTivdd

“President Trump upon arriving in Saudi Arabia on Saturday did not bow to the Gulf leader as former President Barack Obama appeared to do—a move interpreted as American weakness,” the Fox News piece read. Trump has also previously criticized Obama’s bow on Twitter, and appeared to tell his staff that anyone who bowed would be “on the next flight home.”

.@BarackObama bowed to the Saudi King in public–yet the Dems are questioning @MittRomney's diplomatic skills.

Watch Robert Gibbs as @whitehouse spokesman (before he was fired) lie that @BarackObama bowed to the Saudis http://t.co/c2Tf2NZr

Last words from @POTUS before deplaning Air Force One: "I catch one American bowing here and you're on the next Saudia flight home"…

However, those excited by Trump’s symbolic handshake spoke just a smidgen too soon. Because an hour after Fox praised the president, Trump appeared to bow, or maybe curtsy, or possibly both, for the king.

This is the actual Fox News headline from this morning, LITERALLY an hour before this photo was taken. pic.twitter.com/HWlzFdVZvY

How conservatives criticized Obama for bowing to Saudi King. "The bow was an extraordinary protocol violation." https://t.co/oddfkYhGGi

According to CNN, the bow took place while King Salman was presenting Trump with the Collar of Abdulaziz Al Saud, the highest honor in Saudi Arabia.

Of course, Twitter ran with the concept of Trump, whose affinity for gold has plated even the White House, bending back on his criticism of Obama’s bow to bow for a piece of gold. Some even equated the collar to that of a dog’s.

Trump: Muslims are THE WORST, and I will bomb them and— ooooooh, gold. Pretty. https://t.co/rUEaG6y5gX pic.twitter.com/0GqSbi8r9K

The Trump Motto: "Will bow for gold." pic.twitter.com/qkIkmeRn61

You can't even make this stuff up:
Trump bows to receive a gold collar from Saudi royals. https://t.co/GpgKCe1tEd

Although, some Twitter users alleged that the bow looked a lot more like a curtsy, or a bow with a curtsy-like finish.

That moment when conservatives flood internet w/TRUMP BOWS TO NO ONE MEMES & Trump not only bows, but adds a curtsy pic.twitter.com/OXkhiv8bxv

For all those that were apoplectic over Obama's bow, I present the Trump curtsy. https://t.co/dqaNthycVy

Did Trump curtsy to the King of Saudi Arabia? pic.twitter.com/xsTGfg2m0J

I love how the King partly turns away, then sees weirdo Trump doing the curtsy from the corner of his eye… and gets this "wtf" look. 😂

"Unlike Obama, Trump refuses to debase himself by bowing before a king. Diplomat that he is, he deftly opts instead for a half-curtsy" pic.twitter.com/LnHHJMOmC8

We need a little help from @MerriamWebster on this Trump move. Curtsy or curtsey? #BendThoseKnees pic.twitter.com/E9yYKNAX1K

Regardless of the optics of Trump’s clear body bend toward the king, the move definitely doesn’t look good for the president. Especially with all the criticism that was heaped on the last American president for doing something pretty similar.