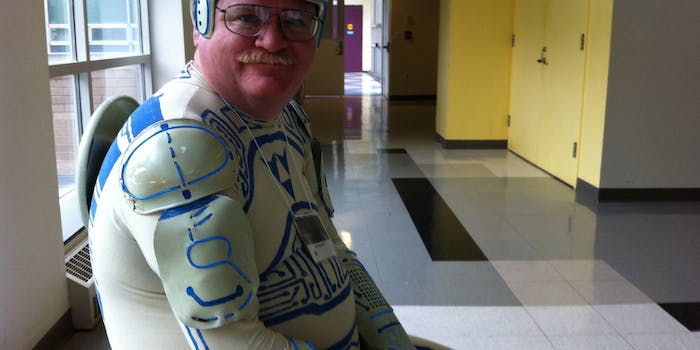 When he’s not volunteering to maintain the IBM mainframe emulator Hercules, Maynard is a computer consultant—just an average Internet hero in Minnesota.

Jay Maynard’s Tron-inspired suit has taken the Houston native to some impressive heights.

While wearing the firm-fitting leotard and light-up body armor, Maynard, 51, has appeared on Tosh 2.0, The Jimmy Kimmel Show, and even performed on America’s Got Talent.

But after eight years worth of TV appearances and conferences, the suit is starting to show its age.

Small holes have appeared in random places, the fabric around the zipper have started to rip, parts of the light-up armor are broken, and the slip-on shoes—once a pale white—have started to turn green and crack.

“I keep telling myself I will fix it but I never manage to do it,” Maynard told the Daily Dot at ROFLcon on Friday.

Maynard lives in Fairmont, Minn., a city of about 11,000 people. When he’s not volunteering to maintain the IBM mainframe emulator Hercules, Maynard is a computer consultant who does installations and some computer software training. Life in Fairmont is pretty normal, Maynard said. ROFLcon, on the other hand, was an entirely different animal.

“I got recognized more out of the costume last night than I have been in years,” Maynard said, referencing the pre-conference party where he wore a T-shirt and some jeans. “That was very unusual.”

What’s perhaps even more unusual is that Maynard has never heard one word of encouragement or opposition from Disney, owners of the Tron franchise. The closest Maynard has gotten to hearing from Disney was when Buena Vista Games, which is now Disney Interactive Studios, had Maynard meet with the marketing team behind “Tron. 2.0,” a first-person shooter released in 2003.

Despite the lack of recognition from Disney, Maynard continues to be a huge fan of the franchise, particularly Tron Legacy.

“I loved it, said Maynard, who plans on making a Tron Legacy-inspired suite in the near future. “My only complaint is that they didn’t involve me in it.”

Surprisingly, Maynard has never cashed in on his Internet-fame. The only money he ever made from the suit was a union wage he collected for appearing on Kimmel. And trips to conferences, including ROFLcon, are funded out of his own pocket.

For Maynard, the suit is about his love for Tron and being true to himself, which is something he thinks many other meme “celebrities” have lost sight of.

“The only way it works is if it’s spontaneous and unexpected” he said. “Otherwise, they are missing the point.”