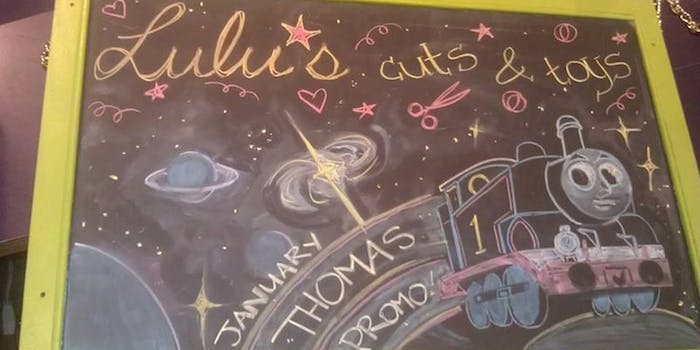 But how's the signal?

Brooklyn’s Park Slope neighborhood is supposed to be a Neverland for young families—or at least that’s how the entitled hipster parents who bring their babies to the faux-dive bars there would like to imagine it. But some beautiful cynic is determined disrupt that smarmy sort of gentrification by any means necessary, including Wi-Fi.

It seems that  LuLu’s Cuts & Toys, a local “combination hair salon and toy store” for toddlers whose style requirements far outstrip the abilities of a normal barber, is under attack by a nearby troll, though he isn’t posting negative reviews or sending SWAT teams to kick down the front door. Owner Brigitte Prat explained on a Google message board:

Unfortunately someone near by has named their WiFi a really awful name referring to my shops, “LuLu’s Anal Bleaching for Kids”. I’ve tried calling Time Warner and Verizon and they can’t seem to help. I have reached out to the 78th Precinct and my lawyer, but they can’t help either because I don’t know who it is. You can see the Network from both of my establishments, you can see it on your smart phone from my stores, my house, or standing in front of 417 & 426 Bergen Street as well as across the street. This is really disturbing and I’m lost to what to do without knowing who it is. Any other ideas on how to handle this?

First off: [snorting laughter], wow, you actually thought Verizon or Time Warner might help you? They hardly bother to show up for set appointments with their own customers. As for your lawyer and the cops, well, I imagine they pretended to “put you on hold” and then went out for a nice long lunch. Is this even damaging the Lulu’s brand? It’s kind of a wash, really: 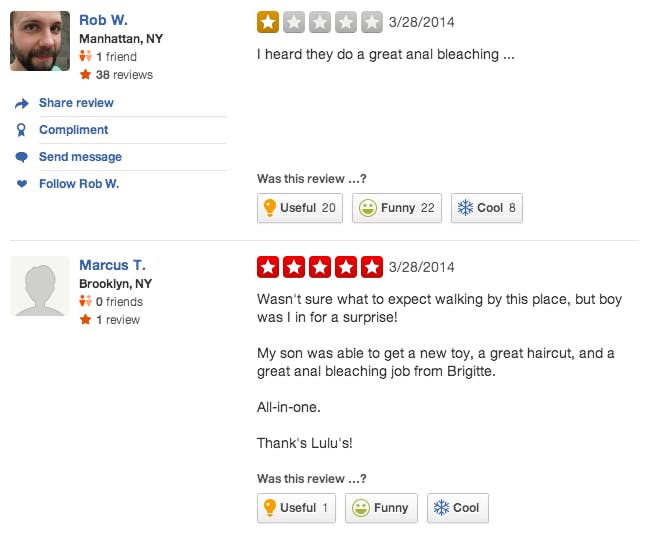