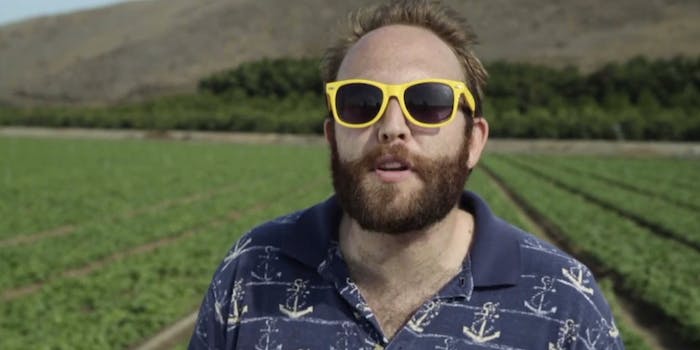 Irritating for a cause.

It was the first chilly day of fall in New York, but that didn’t stop comedian Josh Androsky from running down Fifth Avenue, with a microphone, followed by a small camera crew, asking anyone who walked by, “What’s scarier than a Trump presidency?” Every time someone ignored him, he laughed and said, “Apparently talking to me is scarier than that.”

Androsky, who oozes with joviality, eventually found a bunch of willing participants. One man gleefully told him that he was a Donald Trump supporter because Trump speaks like he would in his own living room. Despite Androsky’s revulsion at that sentiment, he kept his composure and continued to press. He asked, “You call women pigs in your living room?”

“I do not do that,” Androsky told him.

Androsky achieved minor viral fame when he trolled Ted Cruz on Twitter in order to raise money for Planned Parenthood. For every day Androsky didn’t get blocked by Cruz, he had friends (and eventually many Twitter followers) donate to the organization in honor of Ted Cruz.

Now he had set his sights even higher: trolling the most polarizing presidential candidate, Donald Trump, by asking Twitter fans to carve Trump pumpkins or “Trumpkins.” And this time, he was asking viewers to donate to the Women’s Campaign Fund—because for every woman running for president, there’s one fewer Donald Trump.

Once Josh finished shooting his interviews, he tweeted a video of his glorious truck at Trump, challenging him to come downstairs.

He excitedly said, “You never know. He could come down.” As expected, Trump stayed silent, but Androsky nevertheless took pleasure in the knowledge that Trump probably saw the tweet.

Josh’s upbeat attitude almost came across as naïve. When I accompanied him to purchase water for his crew, he informed me that he doesn’t buy Nestlé products because of something that relates to Indian reservations and the drought in California. Androsky, who was an active member of the Occupy movement, is someone who certainly practices his politics.

He’s also the type to have his rants against “the man” come across as charming as opposed to idealistic. When I asked him about partnering with Comedy Central for his Trump project, he told me, “We’re using corporate media to expose a corporate media whore… Comedy Central is the best of the corporate media, as far as the shit that they do, and they treat us really well. They do a really good job of finding Web stuff that has potential to be something more. You see it with Broad City. They know how to do it.”

Despite his innate cheer, when I sat down with Androsky at the end of a very long day, he was visibly stressed. Not only he is operating on no sleep, but he and his director, the much more elusive Ty Greene, were afraid they might get kicked out of their seedy Times Square hotel because they had been caught smoking pot in their room after the shoot wrapped.

The whole thing is endearingly adolescent. Greene and Androsky, both Los Angeles-based, were not used to people taking issue with their weed smoking. “You’re not going to get kicked out of your hotel,” I tell them. “It will be OK.”

In a neon-lit Hells Kitchen Thai restaurant, hunched over a plate of greasy tofu pad see ew, Androsky said, exhausted, “I really hope they let us sleep in that garbage, cigarette-smelling hotel.” He paused. “The other thing is, they call it the Triumph Hotel. You can’t spell Triumph without Trump. All I’m saying is that this goes all the way to the… middle. It doesn’t go to the top. But it goes somewhere close.”

Ty chimed in, “It goes to the low-middle.”

Josh and Ty aren’t comedy partners per se, but in Josh’s words: “We’re really good friends who wanna make shit… It’s so much more informal than partners. I call him Baby G. He’s my baby.” The way they interact with each other is fundamentally cute: Their platonic bond blurs into the familial zone. They have a yin and yang thing going: Josh is dominant, exploding with energy and ideas. Ty is far more practical, calming Josh down when his ideas get a little too crazy, exhibiting a quiet sort of pragmatism.

The pair met five years ago through because their girlfriends at the time were friends with each other. They were taking a group vacation at a share in southern Oregon and bonded over smoking cigarettes, The Kinks, and alienation from the other people at the house who, according to Josh, were into “taking the most pictures of the least interesting things, dressing up in make-up, and doing Molly.” They made sure to emphasize that the girls they were dating were cool; that was just the vibe of the scene.

Neither of their relationships lasted, but a month after Josh’s ended, he reached out to Ty—and they started working together. They have been working on comedy videos and commercials together ever since.

“I don’t necessarily viewer Tyler as my partner in my work things. I view Ty as my brother,” Josh told me.

Androsky has also racked up some impressive solo credits, writing for Spongebob Square Pants and Billy on the Street. His most interesting claim to fame is his appearance on The Price is Right. He took mushrooms beforehand and told Drew Carey that he was “a skateboard rabbi.”

Clearly, Androsky has a penchant for the ridiculous in his art and his real life. When I asked what was next for the duo, they told me about how excited they are for some sketches they had just filmed, speaking about their projects the way a couple would talk about their children.

After we parted ways and they got back to their horrid but desperately needed hotel, Androsky made sure to let me know not only that he and Ty weren’t in trouble, but yes, his weed was still safely in his hotel room.