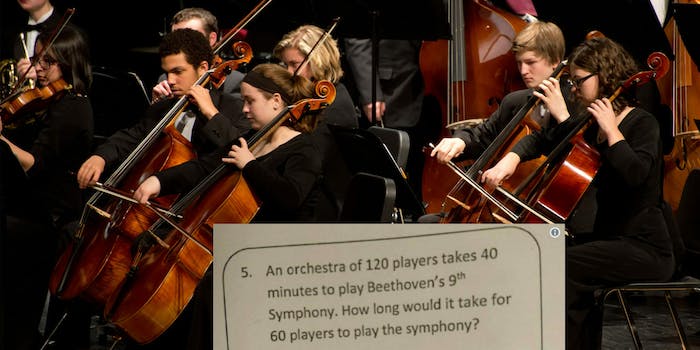 She ended up tricking adults on the internet.

A question on a teacher’s math quiz about an orchestra playing Beethoven’s Ninth Symphony became a meme over the weekend because it didn’t make sense.

The internet quickly mocked it.

The software development version of this is, you do not get a baby in one month by getting nine women pregnant. https://t.co/C5vkwVPbJA

And the seemingly illogical question angered many people.

But then the Nottingham, England-based teacher who wrote the question, Claire Longmoor, saw it being circulated online. She said she wrote it 10 years ago. She provided receipts.

I wrote this!! How did you get this??? I am a maths teacher in Nottingham UK. Wrote this 10 years ago. Here is the original whole worksheet pic.twitter.com/jYX55GSBKz

It turns out that the question was a trick “just to keep the kids on their toes.”

Trick question just to keep the kids on their [email protected]

Some people figured out that the question was a trick.

Whether or not you support throwing in trick questions to test students’ alertness, it’s amazing that the teacher unknowingly trolled the internet.