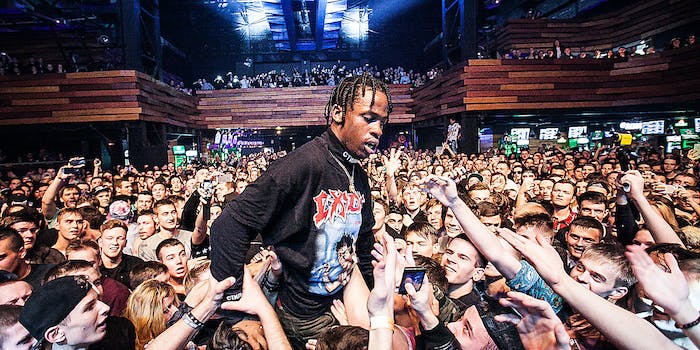 The horrific events of last weekend’s Astroworld concert are still filtering into TikTok, as more details about the collapse of security and medical help come out. Travis Scott partnering with therapy app BetterHelp to offer counseling to those who need it in the wake of the tragedy was lauded as a good first step. But it was also met with criticism and renewed claims that the company is unethical.

BetterHelp offers access to online therapists, and it claims to be the “world’s largest therapy service.” Scott is offering those who need counseling a free month of therapy and vowing to cover the funeral expenses of those who died at the show. His initial apology video was criticized for being inauthentic and immediately parodied on TikTok.

People thought that there was something inauthentic about the BetterHelp offer, too. It was called out as exploitative, and BetterHelp’s policies around privacy and regulation were called into question. “This ‘partnership’ is just offering up these young people to be further mined and exploited for money,” said Bridget Todd.

TikToker therapyden previously laid out ethical issues with BetterHelp sharing client data with third parties like Facebook and Snapchat, as well as underpaying therapists. In a more recent TikTok, he said anyone signing up for the free month should be aware they’re having their “data mined.” Another therapist pointed out that trauma therapy is “complex,” and one month is “not nearly enough time to really get into it.”

Elsewhere on TikTok, people have been talking about their BetterHelp experiences; one woman looking for a therapist who specialized in eating disorders was eventually paired with someone who told her to “start the day in prayer.” Others took issue with BetterHelp’s murky guidelines around therapists’ credentials. Back in May, sticksy617 called BetterHelp a “scam” and pointed out one of its sneaky TikTok ads.

There were also questions about what Scott is getting out of this, financially and legally.

Back in 2018, when BetterHelp was targeting YouTube and popular creators were promoting it, there were also concerns about the quality of its counselors and pricing practices. YouTubers were accused of profiting while sending vulnerable followers to a shady counseling site. Is Scott also profiting here? Do those who opt-in then opt-out of future legal action?

We’ve reached out to BetterHelp for comment on the partnership.

Update Nov. 11: The Daily Dot was directed to a newly updated post, which claims Scott is not being paid, and this is not a sponsorship. It also claims Scott reached out to BetterHelp.