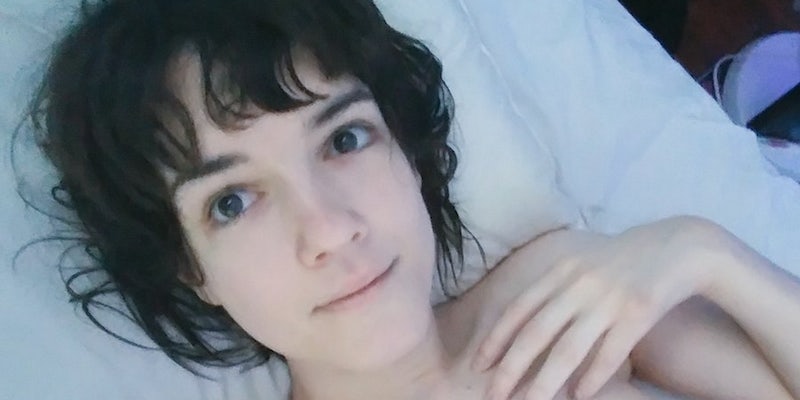 I was getting ready for bed Tuesday night when I spied a tweet from Twitter famous internet sloth @CaseyExplosion. She posted a clip of Hellboy’s Sgt. Whitman saying, “Look at the size of that whammer!” along with a caption: “Trans girl twitter tonight.”

I didn’t understand what she meant at first. Did someone land a sick dunk on Dr. Ray Blanchard again or something? I scrolled through the thread and stumbled across another tweet from Explosion: “⚠️*HUGE* NSFW warning!⚠️” This one featured two eggplant emoji and the Twitter @ for trans adult performer Rookie Stray, @RookieStray.

And that’s when I saw what all the fuss was about. Stray’s pinned tweet showed her nude, with several photos of her absolutely enormous girldick. I couldn’t believe my eyes. It literally went down to her knees.

“What? Where? Who?” writer April Daniels tweeted on Explosion’s post. One minute later, she came back.

“I figured it out and um. Wow. She’s gonna be popular.”

She was right. By Thursday afternoon, Stray landed over 4,200 followers and became the third top-earning trans star on ManyVids for March.

‘What’s going on in trans twitter’
Well, we’re all reacting to this girl with the biggest dick any of us have ever seen, how’s ‘Brexit’ going

*hipster voice* I was into @RookieStray's huge dick for like a year before any of you even heard of it. Her dick is so mainstream now though. I can't go anywhere without hearing about it. Totally sold out.

I know what it’s like to go viral from posting thirst traps as a trans girl—it’s definitely a lot of attention all at once. But this was very different. By Thursday afternoon, Stray landed over 1,400 likes on her pinned tweet and 300 retweets. That’s a lot, especially for a new trans woman in the adult content world. I was curious how Stray was holding up after she blew up, so I reached out over Twitter DM and asked her.

“I was definitely surprised!!” she told me over Twitter DM. “I was really happy it blew up but I’ve never been at the center of that much attention before, I was definitely feeling a little panicky. My roommate had to give me one of her anxiety meds to help calm me down, I was pretty twitchy.”

That said, Stray also feels the overall experience online has been positive. She’s “still processing” everything of course, but she’s glad people enjoy looking at her adult content.

“Again, it’s pretty overwhelming to have so many people talking about your body but the anxiety aside I’m just… glad that people enjoy [my work], haha,” she explained. “It makes me really happy that people want to get off to me, like in terms of validation but also just that so many people seem to enjoy it so much. I like making people happy so!”

For the record, Stray didn’t expect her girldick’s size would cause her to go viral. She figured she fit the perfect niche for a “cute shy girl with a huge dick” and that she would just make “grocery money.” Instead, she blew up. Which is ironic, because Stray doesn’t like bragging about her size; she prefers being teased for it.

“Plus it’s just kinda cute and funny that I have a huge dick,” she told me. “Like… especially if you know me. I don’t think I could seriously brag about it if I wanted to haha. It’s not like my identity or anything. But people are obviously gonna focus on it which is totally cool!!”

I have to admit, I’m part of that crowd that was shocked by Stray’s size, given her cute, shy demeanor. But that’s part of her appeal: Stray defies expectations. You would be wrong to assume trans Twitter is just thirsting over here. While many trans girls are, there’s a lot more going on under the surface.

To unpack what I mean, we have to talk about trans anatomy first.

In the trans community, we have a plethora of names for our peenises: clit, outie, girldick, girlcock, strapless, junk, hen, pussy, even plain old “cock” and “dick,” just to name a few. For the most part, there are certain expectations floating around about how our girldicks are supposed to work. If you’re on a hormone replacement medical regimen, then your penis will most likely become soft, smooth, and somewhat flaccid. Erections will be difficult at best, if not downright impossible. Its size may atrophy too, depending on use.

In other words, trans women generally expect our girlcocks to look soft, small, frail, and flaccid on HRT. Even trans girls with big dicks pre-transition tend to lose some of their size as they continue hormones, just because they aren’t becoming erect randomly during the day anymore.

Pre-op and non-op trans women often use all these changes as a point of pride, comparing our estrogenized dicks to cis women’s clitorises. It’s as if our validity comes from mimicking cis women’s bodies in just the right way.

Stray challenges everything about that. She shows how trans girls’ bodies actually come in various sizes, shapes, and in this case, lengths. This doesn’t take away from her womanhood, either; she’s ridiculously femme and adorable, and her size compliments that part of her. In other word, a lack of size doesn’t make the girl. Stray’s followers love her for her body, not in spite of it. If you doubt that, just look at how many people keep buying her videos.

It’s tough for trans people to share their bodies so openly, doubly so for trans women like Stray. But because she’s out there, doing her thing and openly posting what her body looks like, trans women find her inspiring. Her confidence and openness is encouraging us to explore ourselves and cherish our bodies, whether publicly or privately.

“Big mood; The Dick kinda gave me the push I needed to suck a dick for the first time,” @SeverelySapphic, a nonbinary trans woman sex worker, tweeted.

“If u ever see this Rook,” trans woman @NewGenderWhoDis replied, “know your unfathomable girly dick helped me actualize my own sexuality and put stuff in my butt for the first time in a year.”

For the record, Stray hasn’t seen all of the responses to her adult content, but she’s still happy that other girls are feeling affirmed and inspired by her work.

“I guess I don’t deliberately set out to inspire people or be a role model or anything,” Stray told me, “but I’m glad some girls find what I do inspiring. It’s really cool!”

Big mood; The Dick kinda gave me the push I needed to suck a dick for the first time

If u ever see this Rook, know your unfathomable girly dick helped me actualize my own sexuality and put stuff in my butt for the first time in a year

“I definitely get dysphoric a lot but for the most part, post-HRT, I really like my body and I love being a girl with a dick and stuff,” Stray told me. “I guess maybe I’m minimizing the dysphoria I do deal with a bit but yeah…. my body’s pretty cool most of the time! We get along!”

lol im literally blushing so hard ive got my hands over my face thank u everyone ilu n___n;;; pic.twitter.com/A2wxRycBMw