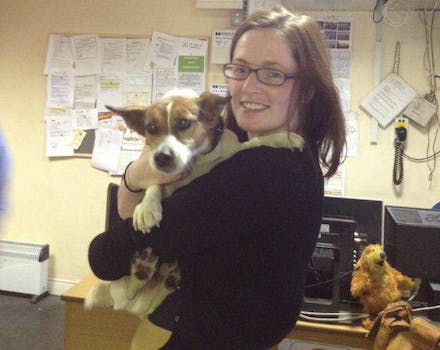 Patch boarded the 6:49am train all by himself at Kilcock’s Irish Rail station, which posted about the dog from its official Twitter handle.

It’s an incredible journey for the Twitter age: An Irish woman has been reunited with her train-travelling Jack Russell Terrier thanks to a single tweet.

Patch, meanwhile, wandered to Kilcock’s Irish Rail station, where he boarded the 6:49am train. Passengers quickly discovered him and brought him to train agents, who nicknamed him “Checker,” as if he wanted to check passengers’ tickets.

“I follow them, as I’m a regular rail user,” Aglin told the Daily Dot.

The photo was retweeted more than 500 times, including retweets by some of Anglin’s friends. Twenty-seven minutes later, the message reached Anglin. She tweeted back: “that’s my dog!”

A little over an hour later, Anglin posted a photo of her safely rescued pup, adding, “Thanks to everyone involved in getting patch back to us.”

Since then Aglin’s sister has created the inevitable @patchtraveldog account, who tweets gems like “glad to be home!!!” and “can i have the leftovers please???”

“Patch needed to thank everyone himself,” Anglin explained.