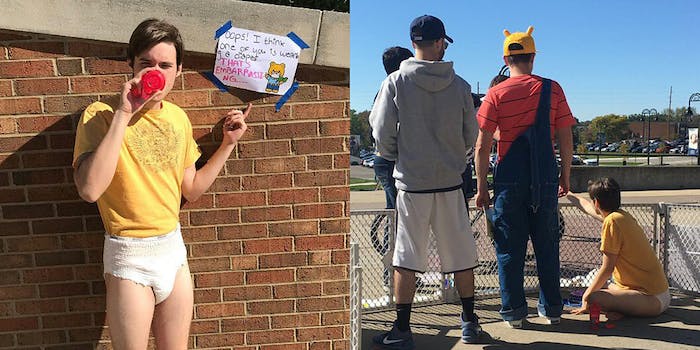 Nothing says "take me seriously" like putting on a diaper and drinking out of a sippy cup.

Turning Point USA, a right-wing student group, dressed in diapers and played inside of playpens Thursday on the campus of Kent State University.

The stunt was designed either to protest the use of safe spaces or to air a repressed sexual fetish, depending on who you ask.

so you guys were just looking for an excuse to wear diapers, yeah?

TPUSA was founded in 2012 by Charlie Kirk of Wheeling, Illinois, when he was only 18. He rapidly became a rising star in the conservative movement. He was one of the key figures in Donald Trump’s effort to sway the millennial vote in 2016 and has become a regular guest on Fox News.

The organization might be best known for its Professor Watchlist, a website that contains a list of college professors the group claims “discriminate against conservative students, promote anti-American values and advance leftist propaganda in the classroom.” According to the site, they only “publish profiles on incidents that have already been reported by a credible source.” But those sources are often other right-wing groups, or even TPUSA’s own news site.

And although they claim to have no ties to the “alt-right,” the loose collection of conservatives who harbor white supremacists, according to the group’s own website, Kirk is a contributor to Breitbart, and they’ve invited figure Milo Yiannopoulos to speak on the campuses of both Miami University and the University of Colorado.

This diaper stunt fits perfectly into Kirk’s notion of bringing right-wing ideals to those who disagree with him. In a 2015 interview with the National Journal, Kirk said that conservative groups need to do more than just “hosting a chapter meeting and speaking to the choir,”

If Kirk is in fact the future of the Republican party, the next few years should be very interesting indeed.