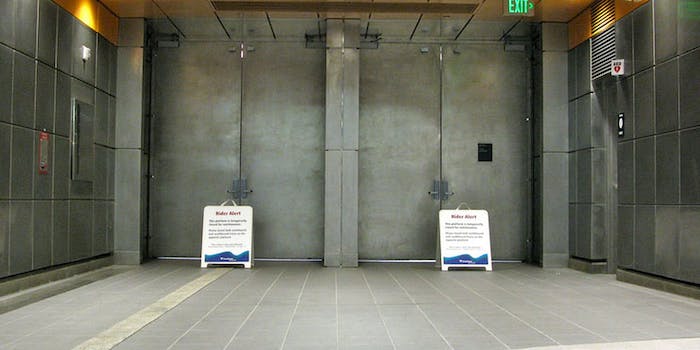 The TPP, that trade agreement that could set new standards for how countries prosecute alleged criminals over the Internet, has long been criticized for being created almost entirely behind closed doors.

The Trans-Pacific Partnership (TPP), that trade agreement that could set new standards for how countries prosecute alleged criminals over the Internet, has long been criticized for being created almost entirely behind closed doors.

But that metaphor became literally true Tuesday at the 15th round of negotiations in New Zealand. Non-negotiating groups, including digital rights advocates from the Electronic Frontier Foundation, have been physically barred from the venue, despite flying in from all over the world under the impression that they could speak with negotiators.

“We have been locked out of the entire venue, except for a single day out of the 10 days of negotiations,” the EFF’s Carolina Rossini and Maira Sutton wrote in a joint statement. “These new physical restrictions on us are reflective of the ongoing lack of transparency that has plagued the TPP negotiations from the very beginning.”

From its inception, the TPP has been defined by tightly regulated levels of access. Using the reasoning that all member countries (including the U.S., Japan, Australia, and much of South America), are fighting to maximize the agreements to their own countries’ benefit, the document is reviewed and reconsidered in secret. However, advocates, including both industry representatives and civil rights groups, have at least been permitted some access each meeting to try and influence negotiators.

For groups like the EFF, this is of vital importance, because leaked drafts of the TPP indicate that they’re considering legally binding agreements that are heavily beneficial to the music and movie industries, which want to maximize copyright—which could have the unintended side effect of altering how countries regulate the Internet .

To be clear, it’s not as if the TPP has exactly been welcoming to advocates in earlier meetings. In the previous round, in Virginia, the Daily Dot observed firsthand when Rossini was permitted to give a single talk about how the TPP’s copyright provisions could impact the Internet. She was given only 11 minutes before being cut off by a moderator, and only 30 people could cram into the room where she spoke.

But at least in Virginia, advocates were permitted to set up tables and presentations during days of negotiations, where negotiators could amble and learn about outsider concerns about the TPP.

“We are having to find special spots to talk to the delegates,” Rossini told the Daily Dot via email. “Plus arrange meetings by email if and when they answer. In the past we could just grab delegates on corridors and ask question.”

It’s unclear how many rounds of negotiations the TPP will require, but the participating countries said in a statement in September of that “the conclusion of the TPP” is a “goal [that is] within our reach.”