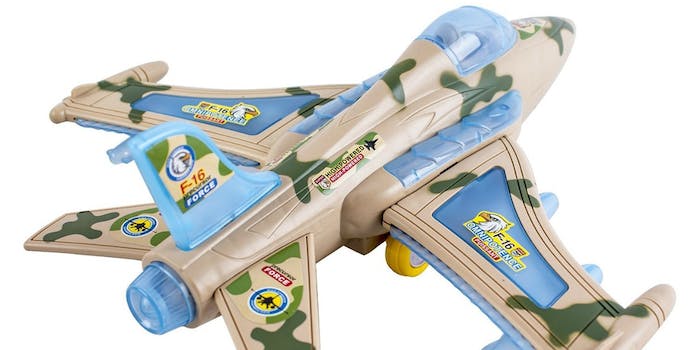 Donald Trump has yet to weigh in.

Do you want a toy jet so your kid can pretend to kill everything in his path while also learning about other cultures and how they should be tolerated even if they’re completely different from theirs? If so, we have you covered.

Introducing: The WolVol Bump & Go Action Electric F-16 Military Fighter Jet Aircraft Airplane Toy with Lights and Sounds. Seems like a fantastic product! On Amazon, it has received five-star rankings 60 percent of the time (out of 322 reviews), and, according to the WolVol description, it would appear to be every warlike child’s Christmas dream come true.

From the WolVol website: “[The WolVol Electric F-16 Military Fighter Jet Plane] is installed with loud music and sounds and makes the noise of an F-16 Military Fighter Jet Plane.” Well, that’s the part we need to talk about. Because instead of those cool pew-pew-pew sounds that accompany the screaming deaths of enemies and innocent bystanders, on the ground, a number of these toys were given a completely different soundtrack.

“It sounds like an Arabic chanting, which is pretty unusual,” Bjorn Thorpe, the uncle of a Bellingham, Washington boy who received the gift for Christmas, told KING-TV, via the Seattle Times. “I think we’re kind of confused on how this would happen.” Pandemonium:

Said Nadeem Israr, president of the Islamic Society of Whatcom County, to KING-TV: “This is a prayer you’re supposed to say when you’re performing Hajj.” When asked about the toy’s soundtrack, Israr said, “It’s very wrong. It’s very, very wrong.”

Luckily, consumers handled the apparent mixup with aplomb and grace. We, after all, are Americans, and we are a reasonable people who enjoy learning about the customs of other religions and … oh, whatever. You know none of that is true.

Not everybody was displeased with the surprise, though.

WolVol said that the factory that produced the toy is to blame, and it’s understandable that parents are mad. After all, they wanted to buy their young children a facsimile of an American killing machine—the kind of machine that has killed Muslims throughout the Middle East—because America is the best. Instead, they got non-Judeo-Christian prayers shoved in their ears. And that is unacceptable at this moment in this country.

We eagerly await for Donald Trump‘s comment on this matter.

@realDonaldTrump Any comment on this toy fighter jet that plays Islamic prayers? These are Xmas presents, after all. https://t.co/OAN4w9ib9r