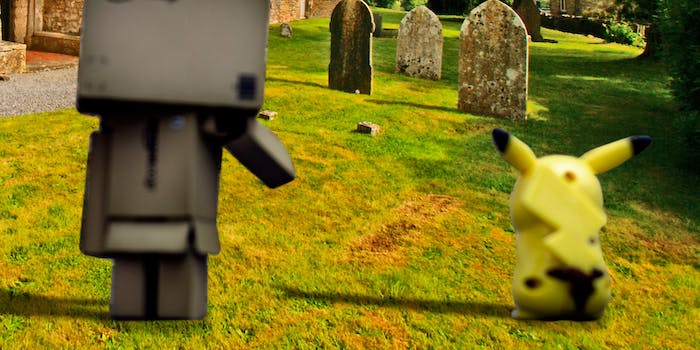 In remembrance of actually getting toys for Christmas

Plastic toys might as well go the way of newspapers and snail mail. Right?

Say farewell to the days of ripping apart wrapping paper, clawing open clamshell packaging, and stuffing in overpriced batteries. No more “some assembly required.” No more accessories and foam bullets and dream houses. No more characters that aren’t pixels on a screen.

According to a new study by Logicalis, 80 percent of kids are asking for a smartphone, tablet, or gaming device this Christmas. Most parents are likely shocked this number isn’t higher; nine of the top 10 selling apps in Apple’s App Store are kids’ games, ranging from Angry Birds to Minecraft: Pocket Edition to something called Trees for Cars. Doctors and experts the world over have expressed concern for how much screen time kids and even infants are getting.

And maybe you’ve seen the chest-thumping that usually surrounds any discussion about parenting styles. Maybe you’ve read the studies about tablets and smartphones decreasing kids’ ability to focus or learn. Maybe you’ve heard it encourages a sedentary lifestyle, one that brings with it everything from obesity and heart disease to bad posture. Maybe you’ve realized the irony of American children becoming dumber through unadulterated addiction to devices and technology built by the very countries kicking our butts in every academic standard.

But perhaps the real story is what these gadgets are replacing. Gone from wishlists are action figures, dolls, playsets, Nerf guns, and the plastic menagerie that has filled toy boxes and credit card bills for generations. While the Toy Industry Association—a trade organization that follows trends in the plaything industry—reported a 2 percent growth in the toy industry between 2011 and 2012, this is stagnant when compared to the overall growth in consumer spending the economy has seen over the last four years. By comparison, the sale of tablets is expected to grow 54 percent by this time next year, many of them going to the ever-profitable demographic of tweens.

A deeper look into the TIA numbers paints an even more stark picture for specific toys. Action figures have seen a 4 percent drop, games are down 5 percent, and plush toys have fallen a whopping 14 percent. Even children-themed electronics, like Leapfrog’s famous brand of tablets for toddlers, are down 5 percent. While these numbers do not show the sky falling, they represent a trend that has been picking up steam since you first went full Super Saiyan after opening your N64. And if that isn’t bad enough, the name most associated with toy sales, Toys ‘R’ Us, reported one of its worst holiday seasons ever in 2012.

The most surprising realization for those of us old enough to remember clamoring for a Cabbage Patch Kid or a Tickle Me Elmo is the complete lack of a seasonal “big toy,” the doll or playset every kid must have. Three of the top five best-selling toys on Amazon aren’t even for kids; they’re different variations of the quite-adult-themed Cards Against Humanity. The outlier is the second-best seller, a “Rainbow Loom” for those now-ubiquitous rubber band bracelets.

All of this is also reflective of a growing population trend: There just aren’t as many kids as there used to be. As Millennials rise to adulthood, they’re choosing to put off having children later and later, creating a drought of toddlers to sell toys to. Instead, what is left is a very large generation of tweens and teens—a prime market for those Rainbow Looms, the first trend of its kind since the Silly Bandz Craze of 2009.

That’s not to say no positive trends exist: Mattel is very optimistic with shareholders about their wildly popular Monster High brand (a line of dolls my niece won’t shut up about). Similarly, merchandising remains a stalwart of the toy industry. No one knows this better than the absurdly successful Lego brand which, better than any other toy maker, has adapted its well-recognized building sets into video games, mobile apps, a theme park, and an upcoming feature-length movie starring Will Ferrell, Liam Neeson, and Elizabeth Banks.

But even the best trends for the toy industry are tie-ins to that ever-growing digital space. Kid-friendly video games like Minecraft and Angry Birds are some of the only successful toy lines reaching out to boys, along with the mandatory toy purchase necessary to play Skylanders.

Formerly the worshipers of GI Joe and Power Rangers, boys especially are migrating away from physical toys. Nearly every best-selling video game of the last five years has been far more successful at luring in boys than girls, be it Call of Duty, Battlefield, or the decidedly kid-unfriendly Grand Theft Auto.

And so what? Complaining about the march of technology is, to paraphrase Stephen Colbert, like boxing a glacier. I, at 25, remember both the joy of getting a real Buzz Lightyear (even writing my name on the bottom of his foot) and the exuberance with which I unwrapped my first PlayStation. Even the National Toy Hall of Fame has begun inducting digital games, starting with the Atari 2600 console way back in 2007 and the Nintendo Game Boy in 2009. Plastic toys might as well go the way of newspapers and snail mail. Right?

That would be a fine view to hold if toys were not so important, both to our economy and our culture. Toys are a $22 billion industry in the U.S. ($80 billion worldwide). The TIA estimates that, from designers to manufacturers to store clerks, toys support more than 607,000 jobs in the U.S. (including 101,000 in small businesses) and drive $11.5 billion in tax revenue. Considering how many fewer hands it takes to make and sell something like Temple Run, it’s hard to see how digital games can replace the brick-and-mortar toy store.

But perhaps more important is the socio-cultural role toys fill. Physical objects connect us to history in a way digital devices may never. “The history of things,” as historian George Kubler called it in 1962, helps us to understand the problems of our current and past reality and how we overcame them. The history of Barbie alone is a 50-year story about women’s rights, self-image, and the changing definitions of success and love, and it does so in a real way old Motorola RAZRs never will.

Toys are also beneficial in a more personal way. While video games can teach kids problem-solving skills and even improve hand-eye coordination, toys teach us how to be people. Kids want a Power Wheel so they can cruise around town like mom and dad. They want a doctor playset because, on some level, they want to explore that career option. Plus, the same cognitive skills strengthened by a few rounds of Assassin’s Creed are just as reinforced by a can of Play-Dough.

Toys are also inherently more social than video games or apps. Sure, most games will offer a multiplayer option of some sort, but you do not learn from others across the cable wires of the Internet the way you do when face-to-face. This is especially true of toddlers, who learn social cues from in-person interaction. Toys—far more than any app—facilitate this process, especially among peers.

Toys aren’t going away anytime soon; they’re still a massive segment of the manufacturing industry, from local shops in the U.S. to megafactories in Asia and Central America. Kids still want remote-controlled cars and Barbie dolls and parents are still buying them. You can still buy a toy the same way you can still buy a newspaper or cable TV subscription.

But unlike those things, toys have a value technology cannot replace. They allow children to build the same connections they’ll slowly begin to hate after they join Facebook. They build the imagination and force it outside flatscreens. They get kids active, giving real pleasure to running and jumping and being healthy. Unfortunately, like most things that make you smarter and healthier, they simply aren’t interesting enough to tear you away from the bright colors of your hand swiping across a backlit screen.