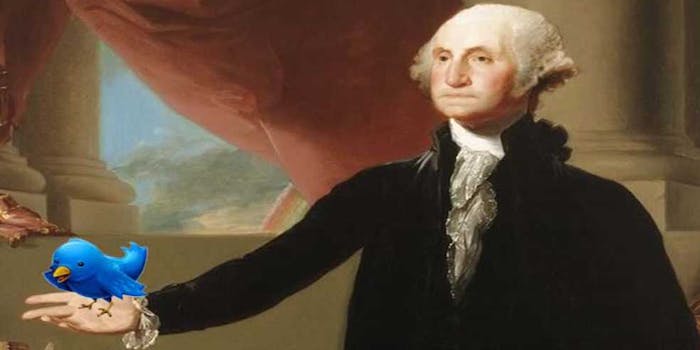 Their tiny heads will spout wisdom in character as long as there's a bored nerd in AP Government with a smartphone and a dream.

It is a sweltering July day in Philadelphia. The year is 1776. As you adjust your powdered wig, you look on as the last signature is scrawled onto the Declaration of Independence. You realize that this is a huge moment, one that will permanently change history, for better or worse.

Let the reins of government then be braced and held with a steady hand, and every violation of the constitution be reprehended.

The collective decision to sever ties with tyrannical England was perhaps the most significant moment of our nation’s history. The Founding Fathers earned eternal reverence—in history books and, now, on Twitter, where their tiny heads will spout wisdom in character as long as there’s a bored nerd in AP Government with a smartphone and a dream.

The “Father of Our Country,” George Washington uses his account to share historical quotations of his each day.

Like Washington, Ben Franklin shares his philosophies and 18th-century humor with his legion of followers. He has also taken the extra, somewhat arrogant, step of turning his own name into a hashtag.

Our nation’s second president has decided to provide commentary on current events. Unscrupulous, Adams describes himself in his Twitter bio as “Great President or Greatest President? I am John Adams; the bad boy your mother warned you about.”

Appropriately enough, Hamilton’s Twitter wallpaper is none other than the $10 bill. Like Adams, Hamilton is also aware of the modern world, and he’s quite confused by it.

In a world where the Voice of the People is increasingly absent from the government, our third president inspires his followers with a host of quotations calling for revolution.

An American Revolution leader, beloved statesman, and beer logo, Samuel Adams is also a retweet fan. The deeply religious Adams is perhaps the most active Founding Father on Twitter. He’s quite critical of Barack Obama. 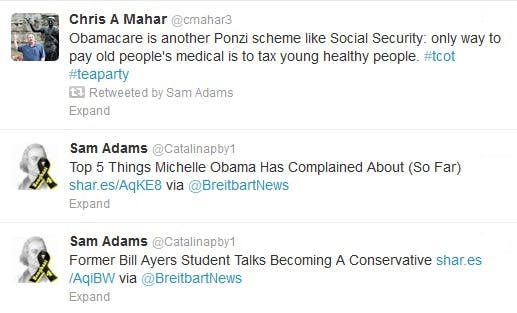 As an aside, if the Founding Fathers had decided to tweet the entire Declaration of Independence, its 8,969 characters would have required 65 tweets. The signatures alone, which total 860 characters, would have necessitated seven tweets.