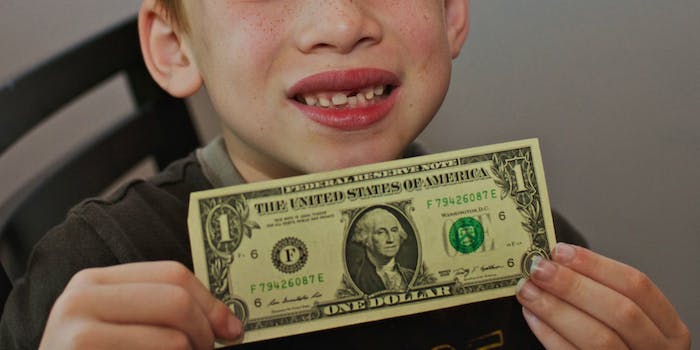 The Tooth Fairy has been a real cheapskate lately

Santa and the Easter Bunny would be so disappointed.

It’s a great time to be a kid.

Thanks to technology, children rarely have to wait in line for rides at Disney World. They can entertain themselves with iPads on long road trips. And, with the advent of DVR and a variety of streaming services, they can avoid the torture of sitting through commercials. (I got into a conversation with my young kids the other day about what it was like having to use a land line that was attached to a cord on a rotary phone. I have yet to regale them with my horror stories of dial-up Internet.)

But here’s where the young kids of today don’t have it so good: The Tooth Fairy is becoming a cheapskate.

According to Visa’s annual Tooth Fairy survey, via the Chicago Tribune, the average payment per tooth has decreased for the second year in a row, and for 2015, the average gift of $3.19 per tooth is about a quarter less from 2014. Leave aside the fact that I would have been thrilled to wake up to three crisp $1 bills under my pillow following the loss of a bicuspid; the Tooth Fairy—who did not respond to messages left by the Daily Dot—apparently isn’t keeping up with inflation.

According to the survey, nearly a third of parents said the Tooth Fairy pays out $1 per tooth, and 20 percent said their kids get $5. Apparently, the Tooth Fairy gets drunk and crazy in 5 percent of homes and ends up leaving $20 or more (presumably, these households are at the very end of the Tooth Fairy’s nightly run, after much bottom-shelf vodka and laughing gas have been consumed).

The highest average payment was recorded in 2013, according to Yahoo, when the Tooth Fairy gave an average of $3.70.Those days seemingly are long gone. Said Nat Sillin, Visa’s director of global financial education: “The Tooth Fairy is finally fluttering back to earth.”

As of press time, there’s been no word on if the Tooth Fairy’s net worth has changed significantly since 2010, which was when Forbes estimated her wealth at $3.9 billion. That ranked her eighth among fictional characters, well behind Carlisle Cullen, worth $34.1 billion.

Photo via Michael Bentley/Flickr (CC by 2.0)