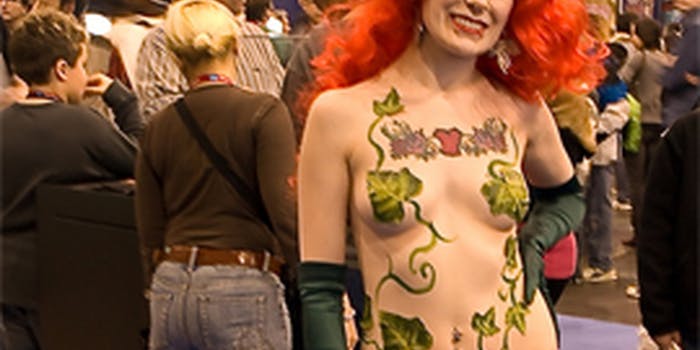 Femals cosplayers and gamers were bashed online this week in three seperate and prominent instances.

Fake geek girls are going to have a harder time than ever “pretending” to like geek culture in order to seduce geek men. The list of wary, ever-alert men with their eyes on you has increased by two—with a third adding himself back onto the list.

Meet threatened male geek #1: Starman creator Tony Harris—or, as his Facebook titles him, Tony Effing Harris. The five-time Eisner-nominee wants female cosplayers to know that he is sick and tired of them preying upon “average comic book fans”—read: white dudes—and that the number of fans who feel disenfranchised by their general existence are “LEGION.” Yes. LEGION.

Harris, who worked on Iron Man, launched into a rambling diatribe on his Facebook last night. The screed against “fake” female cosplayers baffled and enraged many commenters and Internet denizens while causing many of his own (male) readers to congratulate him for his honesty: 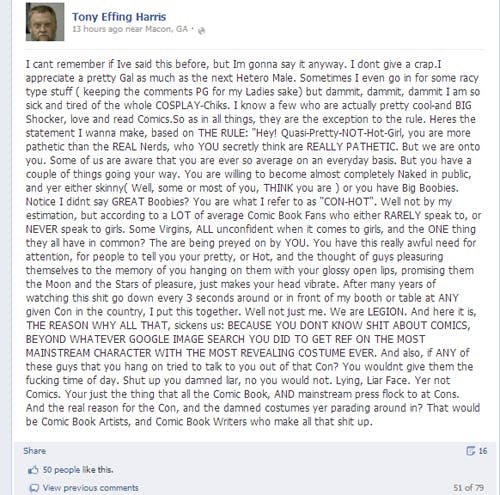 At first, we wondered if the revered comics artist had been hacked; after all, it’s happened before. But no, there he is in comments, explaining, “I know SOME Cosplay gals who are legit. Just too few….”

“Wow, way to lump some of the bad seeds into one bit group,” commented the Mary Sue’s Jill Pantozzi, one of several comics writers who were stalked and harassed recently by a misogynist troll. “A lot of us who cosplay do know what the hell comics are all about. I’ve been a huge fan of yours for years but this is ridiculous.”

Meanwhile, Harris opines, “I mean Jeezus, the one time i ever ‘tried’  to get a bit racy with Chicks in my Comic Art was in Machina with a Artist/Activist character that I put into a Wifebeater-T, NOT wearing a bra ( she was alone, in her studio, Welding….) and I got crucified by the reviewing press/Fans!”

Harris seems magically unaware that numerous members of the online geek community have spoken out against the advent of so-called “fake geek girls” and “booth babes” in comics and gaming culture—most famously Joe Peacock, who held a total tantrum-cum-meltdown on the subject on Geekout. He apologized after drawing backlash from the Internet at large for claiming that “booth babes” were ruining geek culture.

But Peacock’s apology seems as shallow as a scantily clad Batwoman cosplayer, because he not only shared Harris’ rant on his own Facebook with a mighty “This. This this this this this THIS THIS THIS,” he commented to Harris with, “Gee, this sounds familiar. Glad to know we relate on yet another thing, Tony Effing Harris.”

Harris and Peacock are in good company this week. Threatened geek male #2 is Dirk Manning, a reporter for Newsarama and Bleeding Cool as well as the creator of the Nightmare World comics for Image Comics. Not to be outdone, Manning also contributed to the Facebook festivities.

In a further effort to remind geek women that they must first prove their geekdom or risk banishment, Manning reposted an image macro with his own text, “FILE UNDER: “Lest  We Forget…” 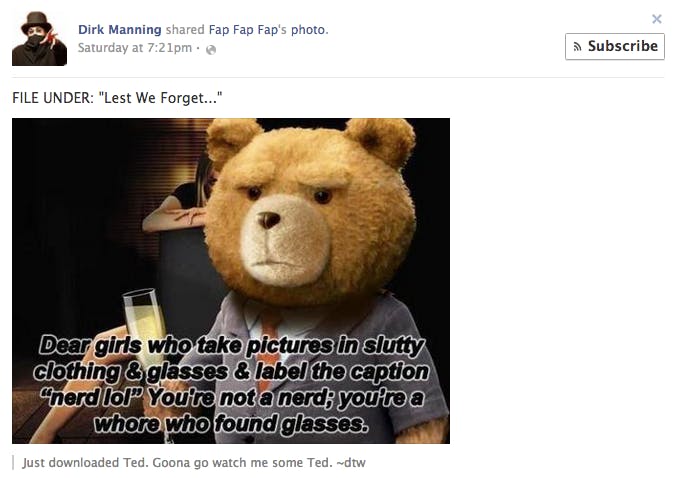 The post was a reblog, but Manning doubled down in the comments after Facebook fans started to speak out.

“it is a pet-peeve of mine when I see a fashion model (for example) slip on a pair of glasses, hold-up a comic book over her ta-tas and then try to say “Look at me! I’m a gorgeous geek.” As a loud and proud geek, this offends me… that’s all. Someone can be a fashion model… or even a nude model. That’s fine. But people should embrace what they really are without lowering themselves to false-advertizement, you know?”

Jennifer De Guzman, public relations and marketing director at Image Comics (the same company where Manning is published), responded to Manning’s statement with her own:

“You don’t get to call any woman who is not, in fact, trading sexual favors for money, a whore without being out of line. Women in the geek/nerd/whatever community have been fighting against this kind of ‘goalkeeping’ for years. Be aware of what’s going on in your own community. You and other ‘I’m not that kind of guy’ people in this community perpetuate sexism without even being aware that you are.”

There is an upside to this story, however: Famed comics blogger, critic, and Batwoman writer Gail Simone, after reacting to Harris’ post with a series of horrified tweets, declared today #CosplayAppreciationDay, which led to an outpouring of posts on Twitter and Tumblr. 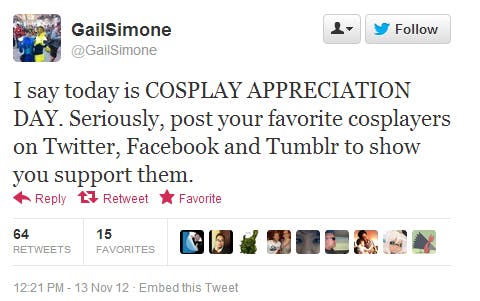