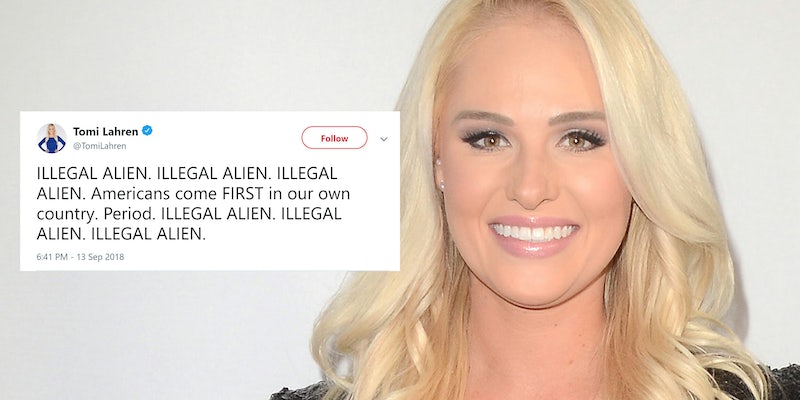 They really want to be able to talk about undocumented immigrants.

Conservatives on Twitter are up in arms about the social media platform’s decision not to promote tweets with the words “illegal aliens,” or “criminal aliens,” saying those phrases violate the company’s hate speech policy. Twitter later reversed the decision, saying it was made in error.

Kirk, the leader of the conservative student group Turning Point USA, posted a tweet repeating the phrase, “illegal aliens should be deported.”

Lahren, the conservative media personality, posted a tweet with the words “ILLEGAL ALIEN” repeated several times. She also expressed the sentiment that, “Americans come FIRST in our own country.”

The tweets come in response to Twitter declining to promote tweets from the controversial nonprofit Center for Immigration Studies, which is designated as a hate group by the Southern Poverty Law Center. The SPLC qualified CIS as a hate group in 2016, after ”its repeated circulation of white nationalist and antisemitic writers in its weekly newsletter and the commissioning of a policy analyst who had previously been pushed out of the conservative Heritage Foundation for his embrace of racist pseudoscience.”

It was founded by John Tanton, who promotes white nationalism.

The phrase “illegal alien” has fallen out of favor in recent years because it is considered dehumanizing. Many activists and immigrants prefer terminology like “undocumented immigrants” when referring to people who live in the U.S. without proper documentation.

The original tweets in question were submitted as promoted ads on Sept. 11, according to a press release from CIS. Twitter didn’t accept them, citing their hateful content policy. The decision was reversed and the ads accepted on Sept. 13.

Sen. Ted Cruz (R-Texas) jumped in, too, criticizing the decision by quoting federal law text, as did the Center for Immigration Studies.

Actor James Woods tweeted about the decision, as well, as did FOX News employees.

Twitter now says calling illegal aliens “illegal aliens” violates some regulation they have. #IllegalAliens Yet that is the official usage by none other than our federal government. Example: https://t.co/DRwOfCzG5R

So @Twitter is apparently blocking posts that use the "hateful" phrase "illegal aliens." You know what else is hateful — illegal aliens killing Americans on American soil. #IllegalAliens

People in this country illegally are either "illegals" or "illegal aliens."

And, oh by the way, illegal alien is the term used by our federal government and the United States Supreme Court. https://t.co/pxgf8Xaf1q

As the conversation about censorship online increases, the only certainty is the complaints will get louder.