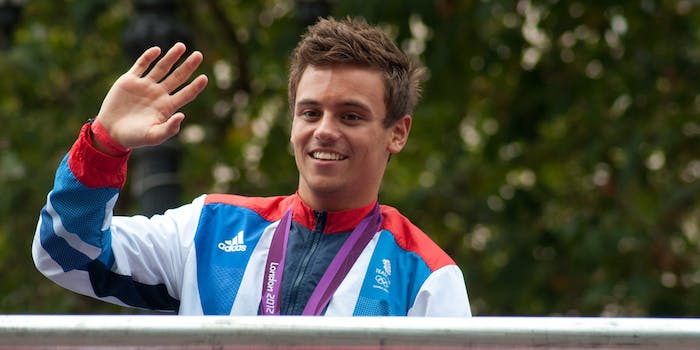 I don't blame Tom Daley for not coming out as gay right away. I didn't either.

Last week, Tom Daley came out again during a UK television appearance, stating that he now identifies as a gay man. When the Olympic diver announced that he was dating a man last December, the widespread reaction to his assumed bisexual reinforced harmful tropes about being “greedy” and sitting on the fence. Instead of considering how we’ve been conditioned to understand sexuality, some made assumptions about how people should discuss or label their orientation.

And for a second time, heterosexual privilege and bisexual stigma have scored landslide wins.

The most popular theme insists that coming out bi is merely a “transition identity” for people who are too afraid to reveal they are gay and that bisexuality just isn’t real. It’s part of the coming out process that gay people know all too well—because many of us did that. So did Tom Daley. So did I.

It took mere weeks into freshman year of high school before other students questioned my sexuality, making me a popular target for relentless bullying. I avoided sharing my truth, lest I give them more ammunition to call me a “faggot.” So I tucked my true self away: pretended to like girls, suppressed “girly” mannerisms, distanced myself from anyone remotely queer.

But after one too many train rides home, with my iPod’s Norah Jones playlist as my sole companion, I burst into tears of desperation. I longed for authentic friendships; for true connection with the outside world. When I came out to the few kind peers who I thought would listen without judgment, I came out as bisexual. At the time, only me and a few gentleman callers knew the truth: I didn’t fancy girls at all.

One could say my story shares similarities to Daley’s, despite our vast differences. During the talk show appearance in question, Daley admitted his fears about coming out at all, let alone for a second time. “I was terrified. I didn’t know what the reaction was going to be. You always think the worst,” he said. Daley later clarified that he first put it out on his YouTube channel “because people were constantly digging and asking questions,” according to Daily Mail. “I wanted to say what I wanted… without anyone twisting anything.”

I can’t blame Daley for feeling this way in a culture where homophobia still reigns supreme and where private lives are the subject of constant intrusion and insatiable curiosity. If you’re gay or lesbian, you know how it feels. If you’re hetero, perhaps you can imagine.

But in either case, none of us know how it felt to be bisexual or sexually fluid last week while surfing Twitter, only to read statements that your identity doesn’t exist. Or, in the case of conservative gay blogger Andrew Sullivan, bragging that his BS detector gaydar goes off when men like Tom Daley come out bi, as if it’s always a lie and something to be viewed with skepticism.

Yesterday over at The Dish, Sullivan posted the equivalent of a schoolground “nyah, nyah, nyah” directed at critics who blasted his December prediction that Daley would “never have a sexual relationship with a woman again.” He even bet on those odds in a direct challenge to New York Magazine columnist Ann Friedman, who heralded Tom Daley’s first coming out as progress for men like him to lay claim to sexual fluidity. It came during a time when public figures including Maria Bello, Frank Ocean, and even Robin Roberts disclosed their sexuality in a label-free way.

Although Sullivan’s “correct” prediction was met with cheers from the likes of Dan Savage—who should’ve given up doling thorny advice for Lent—it was and still is criticized for good reason. He reinforced the stigma that bi and sexually fluid people often encounter when their sexuality gets scrutinized. Even Ann Friedman could smell the biphobia and, in her first tweet addressing Sullivan’s bragging, she told me that she didn’t agree to his so-called bet.

Contrary to popular belief, bisexuality exists, which Sullivan admits at the very least. But when someone says they’re gay, it doesn’t mean they won’t ever date or sleep with someone of the opposite sex ever again. Bisexuality may be considered a “safety” label by gay men terrified of coming out, but that doesn’t make it any less harmful for bisexual erasure. And, in any case, imposing labels on someone who doesn’t use one is a perverse denial of their self-determination to identify as they feel most appropriate. It doesn’t have to be this way.

When someone comes out, famous or not, try listening without judgment. Perhaps we could extend the same freedom and respect we had to understand our own sexuality. Then again, many of us also felt pressure to conform and can’t offer a respect we never even knew. That’s part of what makes normative understandings of sexuality so toxic.

Despite coming out at 14, it took me a bit longer than Tom Daley to not use bisexuality as a so-called safety net: nine months to be exact. But if adolescents could affirm me while I made sense of my sexuality, surely we—and maybe, eventually, Andrew Sullivan—can do the same for guys like Tom.

Photo via MegMoggington/Flickr (CC BY 2.0)