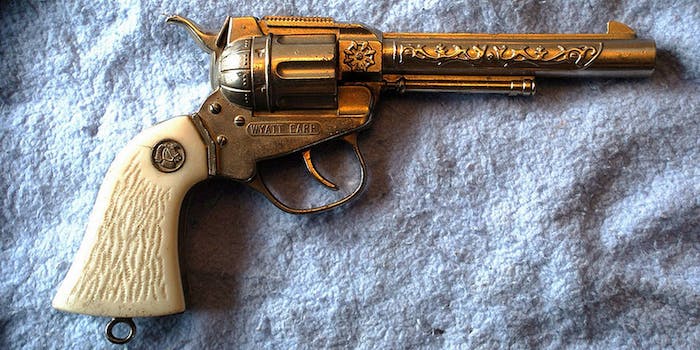 The kids aren't alright. They're accidentally killing each other.

On Saturday night, a Chicago six year-old allegedly shot and killed his three year-old brother while playing a game of cops and robbers. The Chicago Tribune reports that their father’s loaded gun had been stored on top of the family’s refrigerator. It was wrapped in his pajama pants.

Washington Post’s Christopher Ingraham found that in 2015, at least one person per week has been shot by a toddler, three years of age or younger. Using data gathered from news reports, he found that so far this year, “13 toddlers have inadvertently killed themselves with firearms. 18 more injured themselves, 10 injured other people, and 2 killed other people.”

A go-to argument for gun rights advocates on the Internet is that guns make Americans feel safer, but the very ubiquity of guns in U.S. households increases the odds of firearm-related death. The problem of gun violence isn’t solved with more guns, and if you’re the kind of person who shares NRA photos on Facebook, ask yourself: Would arming a three-year-old really have saved his life?

That’s exactly what many on Twitter have been arguing, and John R. Lott, Jr., a prominent gun rights advocate and columnist for the Philadelphia Enquirer, would be inclined to agree. Lott has been a huge proponent of the “more guns = safety” argument, basing his belief on a Rasmussen poll released in June. The poll found that 68 percent of people surveyed would prefer to live in a neighborhood that allows guns. In the column, Lott draws connections between states that allow concealed carry, and a corresponding drop in crime rate.

While Americans can certainly feel safer with guns in their neighborhood, that feeling doesn’t match lived reality, despite the insistence of gun advocates.

“Between 2007 and 2014, murder rates fell from 5.6 to 4.2 deaths per 100,000,” writes Lott, who is highly cited by the National Rifle Association. “This 25 percent drop coincided with a 156 percent increase in the number of adults with permits. A similar drop occurred in other violent crimes.”

Lott, however, has a track record of using misleading data when aligning concealed carry with any fall in murder rates—an argument debunked last year. A 2014 Stanford study found that violent crime did, in fact, increase in areas that adopted right-to-carry laws. “Our analysis of the year-by-year impact of [right-to-carry] laws also suggests that right-to-carry laws increase aggravated assaults,” the researchers write.

Even further, according to a university release about the study, “The murder rate increased in states with the existing right-to-carry laws for the period 1999-2010 when the ‘confounding’ influence of the crack cocaine epidemic is controlled for.” The homicide rate also increased in the eight states that adopted right-to-carry laws during that period.

So, while Americans can certainly feel safer with guns in their neighborhood, that feeling doesn’t match lived reality, despite the insistence of gun advocates. As evidenced by recent child gun deaths, a most of these fatalities are accidental, and the likelihood increases when kids live in homes with gun owners.

It’s hard to know exactly what’s going on in the homes of the families involved in these accidents, but the frequency of these easily preventable accidents demonstrates a complete lack of safety training when it comes to gun ownership.

Even in instances of mass shootings, the notion of training proves why a “good guy with a gun” rarely, if ever, intervenes and saves the day.

In a study by the National Gun Victims Action Council, an organization that aims to find middle ground between gun control and gun rights advocates, they found that armed citizens need extensive training. “For citizens to realistically defend themselves they must have a high skill level. To attain that level requires extensive initial training in the classroom, on the firing range, and with real-life scenarios,” writes Joe Vince, director of the Criminal Justice Program at Mount St. Mary’s.

But really, it takes minimal amounts of “training” to even purchase a gun. According to a report by NPR’s Marketplace, they found that gun ownership requires little more than some paperwork, and maybe a 30 minute online course for semi-automatic weapons, if purchased from a licensed dealer.

Empirically, more guns do not make anyone safer. Instead, they increase the likelihood of an accidental shooting.

“To buy [a pump-action Remington 870 shotgun], I would need to fill out a 4473 — a six page form from the Bureau of Alcohol, Tobacco, Firearms, and Explosives,” reports David Gura. According to Gura, the form included a number of “Yes or No” questions; his Social Security number is optional. The dealer would then call the FBI’s Criminal Justice Information Services Division, and give them the buyer’s name and phone number.

“They give me a ‘yay’ or ‘nay,’ and out the door you go,” the dealer told Gura. “It’s quick and easy. And we take credit cards.” The dealer would then have to hold on to that form for 20 years. In Maryland, where this story takes place, if a buyer wanted a semi-automatic handgun or rifle, they would have to show the dealer a certificate for a firearms safety training course, and fill out a few additional pages of paperwork. “You can take one online in 30 minutes.”

Empirically, more guns do not make anyone safer. Instead, they increase the likelihood of an accidental shooting, either by a stray bullet or an unknowing child who thinks the gun is just a toy.

Feliks Garcia is a writer in Brooklyn. He holds an MA in Media Studies from the University of Texas at Austin.