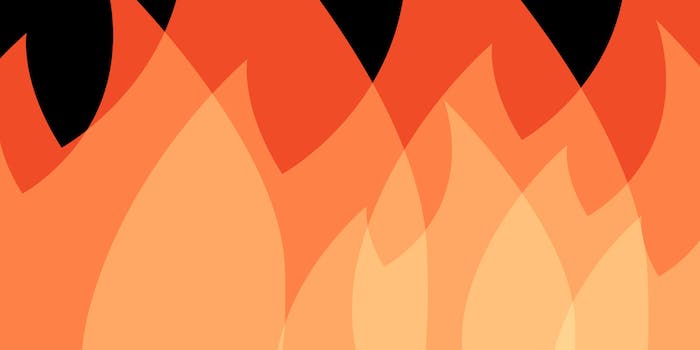 For an app built around rejection, Tinder just can't handle it.

It is one of the great ironies of the Internet that an app built around rejection can’t handle it.

Nancy Jo Sales swiped left, and Tinder did not take it well. In her recent her recent Vanity Fair piece, Sales examines how dating apps are changing the ways millennials experience romance. Not surprisingly, Tinder is at the forefront of this mating revolution—or, as Sales terms it, the “dawn of the dating apocalypse.” The app, she argues, enshrines hookup culture given its preoccupation with picture perfection.

On Tuesday night, the company, whose app allows users to accept or reject a romantic match with the flick of a finger, finally responded. Instead of a press release or Facebook update, both of which seem hopelessly old-fashioned, it unleashed a torrent of tweets. Unfortunately, as the Daily Dot’s Marisa Kabas notes, they read eerily similar to one of the app’s “nice guys” explaining to a match why she should really give him a chance.

Tinder creates experiences. We create connections that otherwise never would have been made. 8 billion of them to date, in fact.

Tinder users can’t communicate unless both “swipe right” to match with one another. After more than 30 tweets, Sales may herself have wished that Twitter had a similar function. The Internet sure did, if the media reaction is any indication.

Vox’s Zack Beauchamp, who curated the tweets in a coherent, if not exactly easy to read, post called them “bizarre” and “defensive.” Mic’s Nicholas DiDomizio went even further, comparing them to the “arrogant, sexist, [and] entitled” response many of the sites straight male users have to women who reject them. BuzzFeed’s Claudia Koerner claims to have received word the rant was about to happen, leading many to speculate this was a PR stunt gone horribly, horribly wrong. Even Tinder itself has admitted that it “overreacted.”

@summeranne I in fact got a pitch from a PR person that Tinder was about to tweet storm, and I should watch for it.

The same can’t be said for the man behind the other Twitter tirade directed at a female journalist this week. On Friday, Donald Trump, the frontrunner for the Republican presidential nomination, went on a sexist Twitter rant against Fox News anchor and GOP debate moderator Megyn Kelly. Trump responded to what he perceived as her unfair questioning about his well-documented history of misogyny.

Unlike with Tinder, Trump’s tirade doesn’t seem to have yet backfired. He was disinvited from a conservative conference hosted by another sexist troll (Erick Erickson), but he’s also seen a spike in the polls, where he was already leading. Still, both incidents are indicative of how companies and public figures are using social media to diminish the role of the old media middleman.

What makes the Tinder and Trump incidents stand out, though, is not just their proximity—occurring within days of one another—but their targets. Both the dating app and the presidential hopeful launched full-on attacks aimed directly at journalists who dared question their brand.

Twitter revolutionized communications by allowing politicians, celebrities, and brands to directly communicate with the public. That can be very good for voters, as Hillary Clinton and Jeb Bush showed when they went back and forth over college affordability this week. Getting a snarky yet substantive debate more than a year ahead of the general election can only be good for democracy. That it’s in 140 characters or less can only be good for our diminishing attention spans.

Alexis Sobel Fitts has called it “the public relations of the future.” As companies have begun “increasingly incorporating social media into their overall strategy,” she wrote at the Huffington Post, “they’re having to navigate communicating with their audience in a medium that wasn’t intuitively designed for corporations.”

This has led to some astounding missteps from corporations and public figures. Last November, the Independent’s Jenn Selby speculated that One Direction’s Louis Tomlinson might be showing support for openly gay Apple CEO Tim Cook—by wearing a shirt with the rainbow Apple logo. The singer responded with a series of defensive tweets calling into question the credibility of the paper Selby wrote for (which in 2004 was named National Paper of the Year), as well as reaffirming his heterosexuality. All this, despite Selby never once insinuating Tomlinson is not straight.

@JennSelby The fact that you work for such a 'credible' paper and you would talk such rubbish is laughable. I am in fact straight.

It’s not just pop stars who defensively tweet before they think, though. Controversial British politician George Galloway has blocked so many people, including journalists, that BuzzFeed’s Jamie Ross catalogued some of the most outrageous examples—one of which included a tweet with the words “park life.” Rwandan president Paul Kagame also has a storied history of sparring with people, again including journalists, on Twitter. In 2011 he and his foreign minister were part of a lengthy argument with a British journalist, and just this week he directly hit back at critics skeptical of his run for a third term.

Tried to check on what George Galloway was saying on Twitter about #tvdebates to discover he's blocked me since I published our interview :(

My evidence of politicians lying is when George Galloway said it was nice to meet me then went home and blocked me on Twitter.

The thing that makes Twitter great—that one-on-one rapid communication—is also what makes it so perilous.

The most galling display of a politician responding poorly to criticism, though, didn’t even involve the man behind the tweets. In 2010, a British local councillor (the equivalent of a city councilperson) tweeted a request that “somebody please stone to death” the columnist Yasmin Alabhai-Brown after she made comments critical of British Prime Minister David Cameron. Alabhai-Brown, herself not even on Twitter at the time, filed a complaint, and the councillor was arrested for the threat.

When we’re asking people to stone journalists to death, we’ve crossed a line. The thing that makes Twitter great—that one-on-one rapid communication—is also what makes it so perilous. It’s both glorious and grotesque.

There are times when calling out problematic journalism is not only appropriate, but necessary. Journalists are no longer the infallible demigods on television, and the news is better off for it. When Baltimore City Councilman Carl Stokes challenged CNN’s Erin Burnett’s use of the word “thug”—a racially-coded term—to describe those involved in the Baltimore uprising, he was right to do so. His reaction started a national conversation, much of which took place over social media, and rightfully so.

And after the Huffington Post’s Josh Zepps said #CancelColber creator Suey Park had a “stupid opinion” about the hashtag, Park used Twitter to reclaim and control her narrative. Thanks to the outrage online, Colbert responded in kind, exhibiting the self-reflection on racial satire most comedians dismiss as “political correctness.”

There’s a difference between speaking truth to power and temper tantrums, though. Tinder’s rant, full of inane ramblings weren’t just cringeworthy, but also seemingly pointless. Sales herself has pointed out the story isn’t even about the company, but about how its product is used in our hookup culture.

As for Trump, it remains to be seen whether his sophomoric and offensive tweets catch up with him. Whether or not they do, the fact remains he is not, as he would undoubtedly have you believe, challenging innate bias on Fox News. And while “good journalism” is something Megyn Kelly will probably never have to apologize for, she’s in the right, in this case.

Both Tinder and Trump perfectly demonstrate how not to use social media. They displayed an unseemly defensiveness at otherwise fair criticisms, revealing an ugly petulance at the heart of their brands. As social media continues to narrow the gap between reporters and the people they report on, we’re likely to see more spats like these play out in real time. That can be good for the public, who get a glimpse into the unfiltered minds of public figures and brands.

But it may well leave many wishing they had observed a Twitter rule that, while in jest, may hold wisdom for some: Don’t tweet.