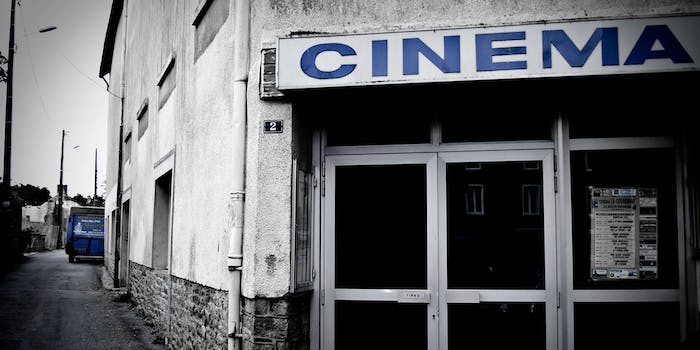 We held each other like two hostages as Daisy continued to get pounded by Brad at full volume.

Few things are more contrived and emotionally psychotic than Valentine’s Day. People buy each other material tokens of appreciation not out of love, but because it’s marked on a calendar and drilled into our collective consciousness. Everyone runs around with their heads cut off, desperately comparing themselves to social standards that are designed to commercialize and package their love for profit.

Going to a porn theatre is easy. Finding some random girl on a dating app who’d want to come with me would be difficult. Or at least I thought it would be. After a few days of unfiltered speed swiping on Tinder, I met Dominique (not her real name), a pretty engineering student from McGill. We had a quick pre-Valentine’s meetup, and over a drunken conversation at a burger joint, I popped the question. She burst out laughing. After confirming that I wasn’t joking, and presumably deciding I was definitely not a rapist, she surprisingly agreed. Under two conditions: the movie “can’t have any big black guys and no girl-on-girl action.”

Before the show, we met at my house around the corner from the theatre, hoping to share a moment of innocent reality and—I don’t know—establish some trust. It wasn’t too late for her to back out, and if she had, I wouldn’t have held it against her. But she was all in. As a result, I had a good feeling about the date. Any girl who was willing to go this far out on a limb would probably wind up being pretty cool. I put on some neutral clothing and we set out into the snowy streets of Montreal’s Plateau.

We didn’t talk much on the way to the theatre. When we got there, I put my hand on the door to open it for her and took a deep breath. This was the official point of no return. I knew that whatever was in there, whatever happened, when we came out we’d be different. Was I ready for that?

I pulled the door open and we walked up to the ticket counter.

The ticket lady’s name was Heather. She appeared to be in her 50s, but who knows what this place might have done to her. Her bloodshot eyes were sunk deep in a sea of wrinkly skin and her scowling facial features were partly obstructed by fraying gray hairs. She eyed me suspiciously as the sound of genitals smacking each other drifted out of the theatre and filled the room.

Heather told us sternly that upstairs there were private booths for an extra $35. Dominique and I looked at each other confused.

“Why, is downstairs really bad? What happens down there?”

Heather waved her hands hysterically in the direction of the theatre, “Oh, I know what happens in there. I don’t go in there, but I know.”

We decided to stay on the first floor and Heather led us through some red leather doors and into the theatre, explaining that they can also provide a tour of the place as well. She brought us to a section with a white plastic chain on either side.

“Nobody can sit beside you here,” she whispered. “Sit anywhere else, and they’ll try.”

There were about a dozen men scattered around the room, some of them sunken into their chairs with baseball caps drawn and some pacing around ominously. I glanced around the room to create a mental map of the creeps lurking in the shadows. I became painfully aware that my date was the only female in a very sexually charged room. The tension was thick. We took our seats and started to watch the movie.

Suddenly, I noticed the men had slowly started to migrate around our chained off section one by one until we found ourselves surrounded. They had completely converged on us from all sides. The air reeked of piss.

I put my arm around Dominique, not to be romantic, but for some kind of mutual security. She clutched my hand so hard that I could see the whites of my knuckles. I abruptly became very aware of the back of my neck. I turned around as the screen went bright, lighting up the face of a toothless hobo two rows behind us grinning at me. I whipped around and looked to my left, where a guy leaning against the wall gave me a creepy Cheshire cat smile. Nobody was watching the movie. We were the all-you-can-eat buffet for lonely perverts. I didn’t feel unsafe, but I definitely did not want to get jizzed on by a stranger.

I sunk down into my seat and tried to focus on the movie. It appeared that Daisy hadn’t done her homework again, but was willing to work out some kind of arrangement with her teacher Brad. Then came the close-up HD asshole shot. The thing was the size of a giant pulsing monster-truck tire, and they kept zooming in to show how gaping and cavernous it was.

“This is like a fucking sci-fi movie,” Dominique whispered in my ear.

We laughed nervously as I glanced around at the walls and ceiling. It was actually really well designed. The place was built in 1914, and the neo-classical interior and terrace wrapping around the second floor was more or less as it must have been a hundred years ago. I wanted to break the tension and share my little observation with Dominique. Then we heard belts unbuckling.

I shot up onto my feet and pulled her out to the lobby to take Heather up on that tour. A forest of heads and hungry eyes turned slowly in the darkness, following us out. We were really glad to see Heather again, and she called for her associate to give us a tour.

Alex crept up to her side and gave us big, creepy grin. He appeared to be Russian and somewhere in his 40s. He had a lazy, foggy eye that drifted around the room as he spoke.

Stephen Keefe is a freelance writer and journalist based out of Montreal, Canada. He immerses himself in the strange corners of humanity, talks to inspiring people, and takes Tinder dates to places that spark his curiosity. He has a B.A. in Psychology but still has no idea why he does anything. Follow him on twitter @keefe_stephen and read his VICE stuff here.

Photo via Emmanuel Tabard/Flickr (CC BY 2.0)