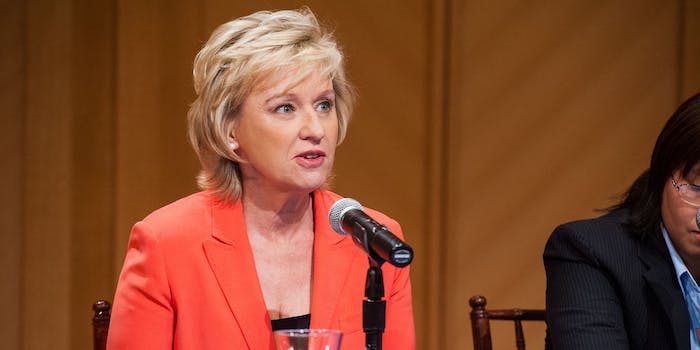 "I guess smiling and wearing a dress makes you a total slut or something now.”

Monica Lewinsky was 22 years old when she made the mistake of having a sexual relationship with her boss, President Bill Clinton. Now, nearly twenty years later, she has written about that regret in Vanity Fair.

For those who remember the media’s flaying of Lewinsky, the VF article is an opportunity to take to social media and dust off tired one-liners about cigars and berets or to remember just how angry we were at the way the Lewinsky was humiliated. Our passion for this scandal isn’t surprising, nor are any of Lewinsky’s revelations.

What is surprising (though it probably shouldn’t be) is Tina Brown’s sexist tirade in The Daily Beast, lamenting the ways in which the Lewinsky scandal set us up for the low-brow, sex-crazed scandals we’ve endured in recent years. It’s not so much Brown’s message that is problematic, but the fact that she’s chosen to colorfully pepper in anti-woman, gender-policing bullshit throughout an otherwise sound essay. The victims of these insults being, of course, women.

In her essay’s second line, Brown refers to Lewinsky’s wire-tapping confidant as the “treacherous thatched-roof-haired drag-queen Linda Tripp, with those dress-for-success shoulder pads,” which makes very clear that Tina Brown has little interest in setting herself apart from tabloid circus she appears to be critiquing. Ripping women apart for their hairstyles or their perceived lack of femininity, as well as using the term “drag queen” as a pejorative does nothing but further the media’s generations-old anti-woman, anti-queer agenda.

How can Brown earnestly say that “other women can often be the worst at cutting any slack towards the love interest in a sex scandal” one paragraph after she describes Lewinsky’s VF photo as a “come-hither…seductive sofa pose?” Especially considering that the photo (which can be seen here) is pretty standard Vanity Fair portraiture. However, as Rebecca Rose writes in Jezebel, “I guess smiling and wearing a dress makes you a total goddamn slut or something now.”

Despite an effort mid-way through her essay to put some responsibility on President Clinton, Brown seems to believe that Lewinsky’s thong merits a mention. “What did Monica expect for flashing that thong at another woman’s husband?” she quips, as if our former President had no agency, no ability to resist the sight of a young woman’s bottom. This just furthers the myth that men are sex-obsessed buffoons, and that it’s not really their fault when women tempt them; a myth that’s as dangerous for women as it is insulting to men.

While both Brown’s essay and the VF article note how much worse Lewinsky’s fate may have been if the Internet of the mid-nineties functioned as it does today, they miss the many tangible ways in which the blogosphere and social media may have helped the former intern. Instead of being tied to traditional media’s portrayal of women and the issues surrounding our sexuality, the blogosphere and social media have created a space where progressive, empowering voices of women can be heard alongside the matriarchs and patriarchs of publishing.

It’s impossible to imagine today’s great feminist bloggers like Lindy West, Anne Thériault, Pia Glenn, Erin Gloria Ryan, s.e. smith or Lesley Kinzel not standing up for Lewinsky’s basic humanity and calling out the media’s obsession with blaming women for men’s choices. I sincerely believe that if Lewinsky’s scandal happened today, feminist writers such as these would make it their business to point out this hypocrisy via a catchy hashtag, a viral blog post, or a tweet so enlightening it would be shared thousands of times.

The Internet has, in most ways, been a great place for raising up the voices of women whom mainstream media has ignored. We have a long ways to go, of course, in diversifying the most popular platforms, and most women writing online face daily threats and harassment from trolls and MRAs, but we are on our way.

The truth is that for women, opportunities to connect with mentors via traditional routes are rare. As a recent study by Katherine Milkman from University of Pennsylvania’s Wharton School has illuminated, mentorship and support in academia is relatively unavailable to those who aren’t white men. In an interview on Refinery29, Milkman explains that female professors are just as guilty of prioritizing white men, and dismissing women and people of color:

Refinery29: The professors you reached out to spanned both men and women across all of the ethnicities you mentioned, correct? Did women show bias in the same percentages as men?

So while I’m not surprised that Brown seems to have missed the ways in which today’s Internet serves to support women, I am disappointed that Brown passed on the opportunity to do something different with Monica Lewinsky’s story. She could’ve written something that resisted the temptation to slut-shame or make middle school-level snarky jokes about other women’s appearances, bowing to the lowest common denominator.

I regret, for all of our sakes, that Brown didn’t model a new way to report on a sex scandal. I wish that she had taken the opportunity to be inspired by the work being done by the women who are the future of publishing, the ones whose mostly-online work is seen by a fraction of the audience Brown’s is, but who are leading the way as truly pro-woman writers.

If Brown won’t be a leader to younger women, maybe she should, at the very least, be listening to them.

Photo via SFS Communications/Flickr (CC BY 2.0)