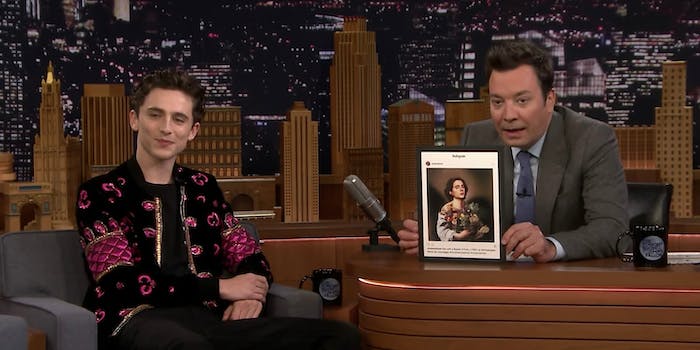 Timothée Chalamet broke out last year with Call Me By Your Name, but on top of making art, he’s become art—and Chalamet is definitely aware of it.

Speaking to Jimmy Fallon, Chalamet—who is promoting Beautiful Boy—reflected back on the surrealness of the past year, which included countless nominations and a trip to the Oscars with his family. But Fallon also asked Chalamet if he knew about an Instagram account that Photoshopped Chalamet’s face into Renaissance art. The account, which began posting in July, now has more than 63,000 followers and is still going strong.

Chalamet—who did know about the account—admits that he definitely wouldn’t be able to do something like that. But while he’s a bit overwhelmed by it, he’s appreciative of the account.

“That is so weird, I can’t—but it’s cool, it’s cool,” he said. “And I’m grateful to whoever is doing that, thank you, thank you for working on that.”

Among the Laurel Blossoms, 1914 by Charles Courtney Curran #chalametinart #timotheechalamet

A Young Man with a Basket of Fruit (Personification of 'Summer'), 1640 by Bartolomé Esteban Murillo #chalametinart #timotheechalamet

Beautiful Boy is already getting Oscar buzz, so we might be seeing more of Chalamet doing interviews and attending awards shows. But in the meantime, it just might end up inspiring even more art.