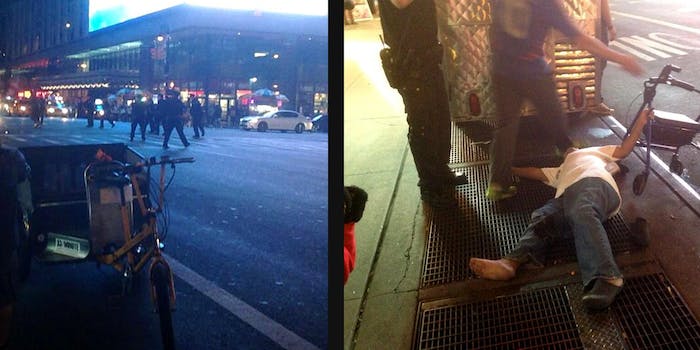 The two New York Police Department officers ended up injuring two Manhattan women. One was shot right in front of Kerri Ann Nesbeth, a recent Florida Atlantic University grad who had just gotten her hair and nails done in Harlem.

This cannot be happening in front of me @CNN pic.twitter.com/aREMVNp8F4

Man hit by taxi gets shot at 4 times by NYPD, they hit a pedestrian instead :( pic.twitter.com/XOINkahT31

Police were in pursuit of a 35-year-old man who had “been darting in front of cars on 42nd Street and Eighth Avenue,” the New York Times reported.

“He was just wandering, running away from the cop,” a witness said. “He tried to run and ended up getting hit by three different cars.”

One of the bystanders was a 54-year-old woman who ended injuring her knee, said Police Commissioner Ray Kelly. The other pedestrian was a 35-year-old woman, who “suffered a graze wound to the buttock.” It is unclear which woman was captured in Nesbeth’s photo.

Meanwhile, video of the incident began to surface on Reddit and other social media: