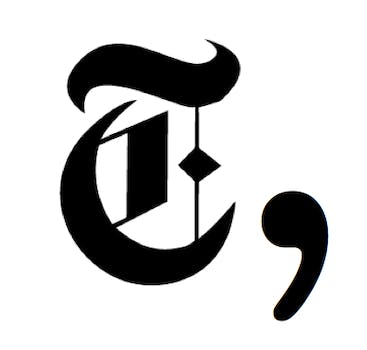 The hilarious story behind @NYTPrepositions.

For all that the New York Times does well, the esteemed daily paper sure writes some dumbfounding headlines.

You know the headlines we’re talking about. They’re the ones writer Alex Leo articulated in a 2011 Tumblr post—item three on “The Four Kinds of NYT Headlines”—”The Kind that Smugly Give You No Information Whatsoever.”

“These are the oddest of the bunch,” Leo wrote then. “The ones that make searching for and finding the story virtually impossible.”

More than their search-engine-optimization relevance, Times headlines can be downright ambiguous. “In a Life Filled with Firsts, One More,” reads one headline from April 2011. At Their Feet, Crafted By Hand,” reads another, also from last April.

Read without context, those headlines make zero sense. Even with some background—like this one, “As Microsoft Shifts Its Privacy Rules, an Uproar Is Absent”—they’re not exactly attention-grabbing.

It’s a confounding conundrum for writers and Times readers alike, who know full well of the publication’s influence despite its glaring refusal to tell more story in each headline.

In the midwest, two college buddies have decided to take their obsession with the antics public. Last Sunday, Robinson Meyer and Nick Castele created the @NYTPrepositions Twitter handle, an account dedicated to retweeting the preposition-happy, smugly-giving-you-no-information-whatsoever type of headlines that have become so synonymous with New York Times coverage. 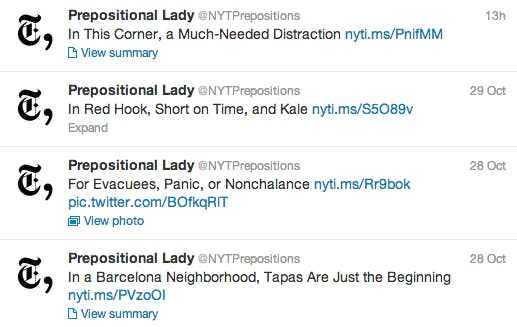 “It was a joke that Rob and I have shared for a while,” Castele told the Daily Dot. “I don’t know if there was one specific tipping point. We started tweeting at each other with examples of the best headlines we found. We’d usually post them with the hashtag #NYTHeadlineWatch.”

And while none of the aforementioned have offered @NYTPrepositions a #followback, more than 400 people have started tracking the account’s tweets. Even NYT reporters like Rome bureau chief Rachel Donadio, metro reporter Sam Dolnick, and advertising reporter Stuart Elliott have gotten in on the fun.

“My favorite, and the one that’s sort of the feather in our cap, is that @NYTFridge favorited one of our tweets,” Castele said, referencing the parody account perceived to exist from within the New York Times’ office refrigerator. “I don’t think you can get any better than an @NYTFridge favorite.”

@NYTPrepositions also helped inspire another trending topic today, #nytbooks, a literary play on the Times’ headline habit that inverts the titles of well-known books to fit into the preposition-friendly mold.

So does Castele hope that the newfound fame surrounding his parody account will lead to a change in the way that the Times writes its headlines?

“Oh no,” he said. “I hope that they don’t change a thing. I hope that those headlines are there for us to read for the rest of our lives.”

On a microblogging service, another joke finds its 15 minutes.