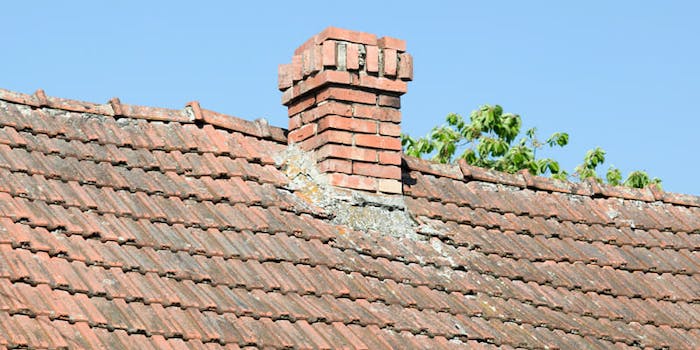 The act of lovemaking has been given many cutesy euphemisms over the years, making the subject easier to discuss in polite company. Some call it “nookie,” others call it “knocking boots,” “a roll in the hay,” a game of “hide the salami,” “business time,” and so on and so forth. These days, the kids call it “Netflix and chill.”

Whatever wink-wink, nudge-nudge term you refer to sex as, it’s likely that the recipient will get the general gist of what you’re talking about. Except, in a new Times of London article about why watching television is killing sex for middle-aged couples, columnist Carol Midgely referred to it as “sweeping the special chimney.”

Say what? Here’s the offending excerpt from her piece:

Well maybe it should begin by conceding that it is partly to blame. Television, I mean. A study from the University of Delaware has just found that it’s TV that kills your sex life. People who own TV sets—and, let’s face it, that’s mostly the over-40s because they’re the only ones who can afford houses to put them in—are 6 per cent less likely in any given week to “sweep the special chimney.” Along with mobile phones, television is associated with “sex life morbidity.”

At any rate, the gaffe might have been overlooked and subsequently disappeared into the internet ether … if the Times of London didn’t use the following tweet to blast out the article:

"It’s TV that kills your sex life": people who own TV sets are 6 per cent less likely in any given week to “sweep the special chimney” https://t.co/zW23YdJRBY pic.twitter.com/amn2UMbWaV

And from there Twitter pretty much unanimously cringed in revulsion:

Congratulations to The Times for coining the single worst phrase that has existed in the English language. https://t.co/htOv2WRu9m

We’re not all Shakespeares over here

this study is now irrelevant because the phrase "sweep the special chimney" has single-handedly ensured i will never fuck againhttps://t.co/bcim409epC

I wouldn’t fuck anyone who called sex that https://t.co/MT3lfiAr3f

I swept your mum’s “special chimney” and found a badger and a bucket of jellied eels in there. 1/5 stars, would not eat there again. https://t.co/VJK63HhxvQ

sweep the special what now https://t.co/LLM8nt5GET

Maybe you’re not having sex because that’s what you call it. https://t.co/XKvAQtEcPT

Even Netflix UK & Ireland got in on the joke:

And someone found a way to turn it into the Distracted Boyfriend meme:

This is a cautionary tale to writers everywhere to have a good, long, hard think (pun intended) before coming up with a new word or phrase for sexy times. When in doubt, Urban Dictionary it out.