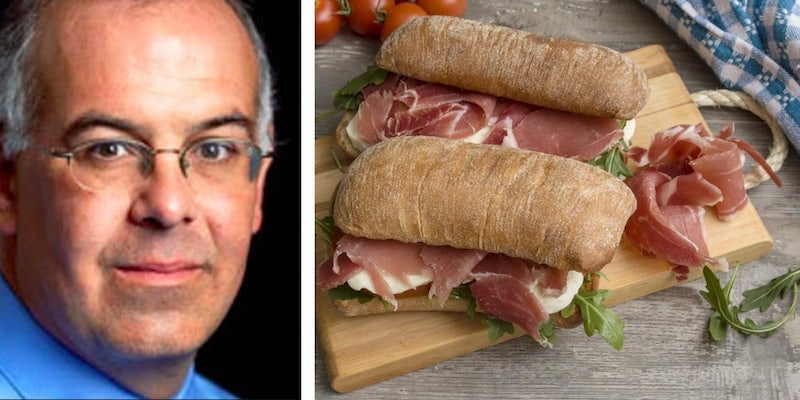 Sandwiches! They’re pretty much the greatest equalizer in all of humanity. Everyone can enjoy them. Everyone does enjoy them. That’s, like, an immutable fact of life. Right?

Apparently, a New York Times’ columnist believes otherwise. Sandwiches, actually, are the great divider, a classist institution that mocks the destitute from on high, chortling as the meager and undereducated struggle to comprehend their existence.

Meat? Bread? Together? How does it work?

In an article titled “How We Are Ruining America,” David Brooks postulates that fancy sandwiches are widening the gap between the rich and the poor, the college-educated and those with mere high school diplomas.

Recently I took a friend with only a high school degree to lunch. Insensitively, I led her into a gourmet sandwich shop. Suddenly I saw her face freeze up as she was confronted with sandwiches named “Padrino” and “Pomodoro” and ingredients like soppressata, capicollo and a striata baguette. I quickly asked her if she wanted to go somewhere else and she anxiously nodded yes and we ate Mexican.

Brooks claims that “American upper-middle-class culture (where the opportunities are) is now laced with cultural signifiers that are completely illegible unless you happen to have grown up in this class.” That’s a great point—except you could just tell your damn friend what those things are. Soppressata? It’s cured ham. Capicollo? It’s also cured ham. Bread? It’s bread. If they were truly befuddled, you could have helped them and they would no longer be excluded from the upper echelon of America.

That would have been the simple solution, which Brooks glossed over, instead turning it into a parable about the downfall of America. Meanwhile, Twitter absolutely lost it over Brooks botched attempt at a relatable anecdote. I hope you like paninis, Mr. Brooks, because you are about to be pressed.

“I’m sorry you aren't smart enough for sandwiches,” I say to my friend.

Silently, she mouths: “Thank you."

This is the most patronizing, infantilizing thing I've ever read from the NYT. Which is saying something https://t.co/UlfhkpgHRm

Is David Brooks suggesting you need a college degree in order to know what…Italian deli meats are? Do people w/ GEDs not eat sandwiches? https://t.co/hZ6CuLLgJU

i too recall college orientation when the dean explained various cured italian meats to all incoming freshman https://t.co/neQobam1Qm

Then came the very good memes about this seminal moment in sandwich social strata.

One time I took David Brooks to my local Cracker Barrel; but he seemed uncomfortable so I took him to Le Cirque.

DAVID BROOKS: [to no one] THIS IS NORMAL. HE IS ASKING IF WE WOULD LIKE PEPPER, A SPICE, ON OUR FOOD

David Brooks: This sandwich has lettuce. It's leaves you can eat.
Idiot friend (went to non-Ivy League college): ME NO EAT LEAF! NO LETTRUS!

But there’s a happy ending to all this. In a way, Brooks initial presumption was proved wrong. Sandwiches didn’t divide us. They brought us together.