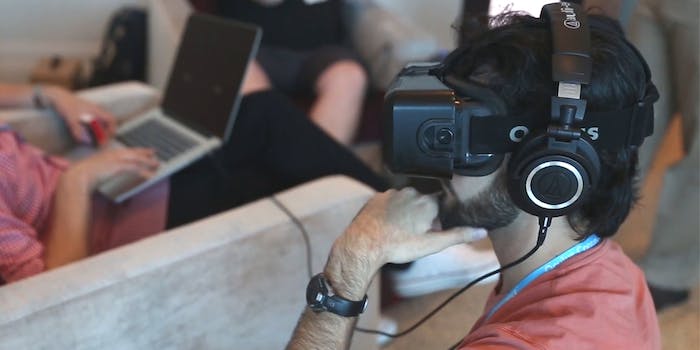 Is there a future for the Internet's favorite VR headset?

I have no doubt that when and if the Oculus Rift virtual reality rig becomes a commercially-viable device, it could be cool for gaming. That’s a big “if,” however, and there’s still no “when.”

The Oculus Connect conference was held in Hollywood, CA on Friday, Sept. 19 and Saturday, Sept. 20. The news out of the conference was not an estimated release date for a consumer model or any news about how much it will cost. The big announcement was about a third Oculus prototype, named “Crescent Bay,” which follows the previous DK1 and DK2 prototypes, and which apparently won’t be distributed to game developers, like the previous two models were.

In other words, the big news from Oculus is that they have a piece of hardware hardly anyone will be allowed to use.

Oculus showed me their first prototype at PAX Prime in Seattle in the Fall of 2012. Two years might not be a long time when it comes to the development of such a potentially-revolutionary technology. Samsung is bringing a VR product, admittedly using Oculus tech, to market this year, however, and Sony demonstrated a Project Morpheus prototype at the Game Developers Conference in San Francisco in March, which is now 85 percent complete.

In the consumer electronics industry, there’s usually something new every year to salivate over, even if it’s only an iteration on existing hardware. New video game consoles, on the other hand, have historically been released every four to five years. The last gap between console generations was eight years long.

With the hardware shoved into the PlayStation 4 and Xbox One, it’s reasonable to suggest that we could be looking at another, similarly long period between console generations. Gamers and industry observers need something to gawk over in the interim. Hence the attention enjoyed by the Oculus Rift.

The new “Crescent Bay” prototype features integrated sound—to be fair, something the unit desperately needed—and is lighter than previous prototypes, and has head tracking. But one improvement I’m not hearing about is whether or not the new unit is comfortable for people with eyeglasses to wear.

When I tried an Oculus DK2 unit at PAX Prime last month, the eye-well, or the space between the front of your face and the screen wasn’t deep enough to accommodate my glasses, without which I cannot see in sharp focus. I was in a significant amount of pain as my frames were smashed into the bridge of my nose, and I had to spend a few minutes balancing the discomfort with an ability to focus my vision.

What percentage of the gamers and hardware fetishists in your life wear glasses? It’s difficult for me to get excited about Oculus adding improved optics to their newest test unit when I’ve still heard nothing about whether or not me and the horde of potential consumers for the device who wear glasses could actually use an Oculus Rift.

The best solution I’ve heard so far is to order a new pair of lenses and glue them to the inside of the Oculus so that, when you put the headset on, you are effectively also putting your glasses on. That’s the best solution.

Crescent Bay is a watershed moment, apparently, even though it sounds like the best thing about the new unit is that it doesn’t give some users motion sickness, which is something else I can’t get excited over, because that’s another 101-level problem for this kind of hardware.

In this video shot at the conference, Oculus VP of Product Nate Mitchell actually talks about “strap technology,” as in “the thing that holds the Oculus onto your head.” The head strap is a talking point? (Also, note that at 10:26 the video host is instructed to take off his glasses before he straps on the Crescent Bay).

At PAX Prime in 2012, I had another virtual reality demo, but it wasn’t given by Oculus. It was offered by a company that makes small, high-definition screens the kind of which are installed in every smartphone or tablet you’ve ever used. This company cared less about VR than about showing off the quality of the screens that make devices like the Oculus Rift possible.

This mobile display company had a copy of Half-Life 2 hooked up to a VR helmet and a fake gun, and a mock-up of a race car cockpit that you sat in, with a steering wheel and foot pedals, to play a racing game. They also had an architectural simulation. An architect could design a room, load the design up into a VR program, strap a VR headset on, and then check her work.

That architectural tool continues to be my favorite VR demo of all time, because it successfully addressed the two issues that will determine whether anyone adopts virtual reality hardware. Price, and utility. An architectural firm can probably afford to pay whatever an Oculus Rift will cost at release, and could justify the purchase owing to the clear utility of the simulation I tried.

A gamer, on the other hand, has a very different price range and set of priorities. The Oculus Rift Development Kit 2 is currently priced at $350. For another $50, a gamer can buy a full-on game console like a PlayStation 4 or an Xbox One whose future is guaranteed to include a robust software library.

I don’t see the Rift becoming popular as a gaming peripheral for any more than $200, and even that’s probably a stretch, not to mention the cost of a gaming PC that can actually run the Oculus hardware, if it can’t be made to work on consoles.

A robust software library for any peripheral is developed only when the size of the install base warrants the investment of game developers’ money and, perhaps more importantly, time, to develop games for that peripheral. And we already know that the best virtual reality games are designed specifically for virtual reality gear. VR as a tacked-on display option feels tacked-on and, therefore, isn’t compelling.

Smart money bets on game developers waiting to see how many people bother with Oculus before they start developing VR games for the rig. Gamers don’t buy the Oculus unless they have games to play. This is the story of the PlayStation 3D Display, and the Kinect camera, and the PlayStation Move system, all of which are curiosities at best because hardly anyone developed games specifically for the hardware.

The most damning point against the future of the Oculus Rift, however, is utility. Oculus trotted out a new buzzword at Oculus Connect, “presence,” which is ostensibly the idea that VR rigs can give players the distinct feeling of occupying a space. Game developers can already do wonderful things to trick us into thinking we’re seeing in three dimensions, even though the image is only being conveyed in two. P.T. conveyed a ton of presence, even if I was just looking at a television screen.

I’m not a Luddite. I enjoy new technology, but only when it’s practical. The excitement over non-events like Oculus Connect is really tired. We know what they’re doing. We know what the potential is. Message received. There are only two things worth getting excited about, anymore, when it comes to Oculus.

Price, and when you can buy one.