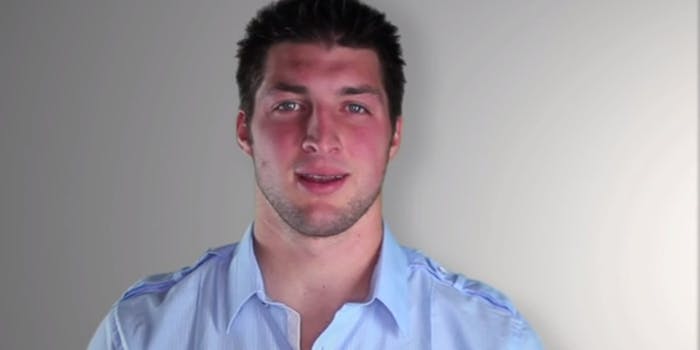 The legacy of Tim Tebow in 1 priceless photo

This is the kind of photo that could launch a political career.

It’s been a quiet football season for Tim Tebow.

Cut by the New England Patriots in June, the former quarterback sensation has spent the last few months as a spectator on the sidelines, apparently mulling a career in broadcasting.

His legacy can be summed up in this one glorious photo, posted to Twitter yesterday afternoon.

My state in a single image pic.twitter.com/VhakUSZZ4J

There’s the immortal Heisman trophy pose, an honor  he picked up in 2007. There’s his University of Florida-colored Crocs, a baby cradled like a football, no less than four wristbands, and a dude back in the background with a fanny pack trying to get a closer shot.

It’s the kind of photo that could launch a political career.