There are many ways one can terminate a relationship with a suitor in the digital age. One can send an email or text-based transmission proclaiming one’s dissatisfaction with the relationship. One can change one’s social media status to “Single,” without warning or advance notice. Or, alternatively, one can post an extremely NSFW selfie with a note that reads, “Tim, I can cheat too.”

The selfie blew up on social media. But the true story isn’t quite as dramatic as it looks.

Currently circulating on Twitter, the selfie features a young woman covered in what appears to be semen, accompanied by the message to Tim, supposedly a boyfriend. Here is a censored, SFW shot of the photo: 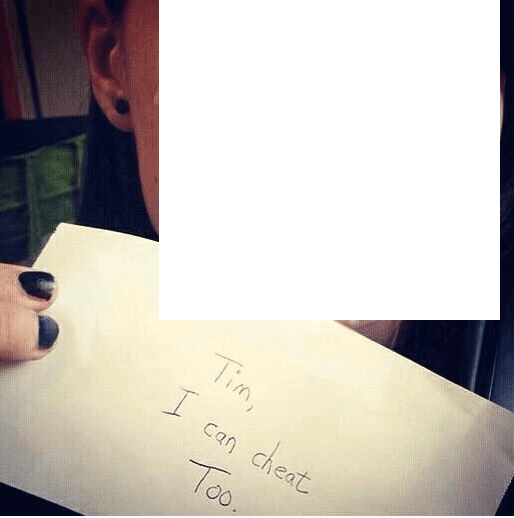 'Tim, I can cheat too' picture was unexpected, I wonder if this would be his response: pic.twitter.com/VeUhvkknEK

The image was also shared on Reddit on r/WTF, where it was eventually banned for violating one of the rules about “inciting a public outcry.”

Unfortunately, while I love a good “boy meets girl, boy breaks girl’s heart, girl takes revenge by tweeting a photo of her semen-covered face” narrative just as much as the next blogger, the backstory is pretty boring.

So! Sorry, guys—the photo’s a hoax. But at least dudes named Tim can sleep easy tonight.