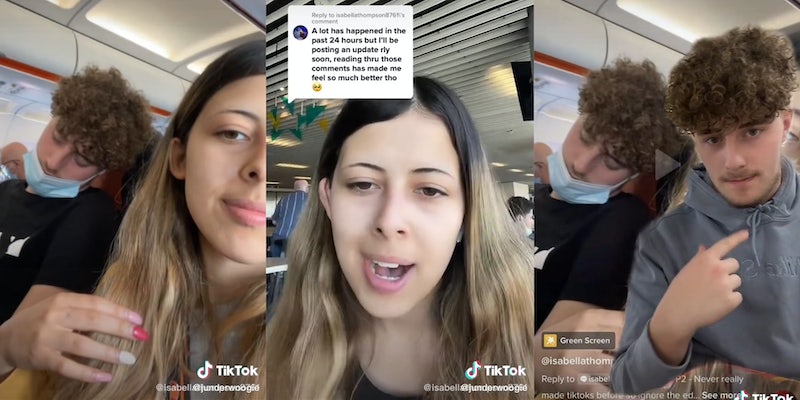 ‘No idea who she is’: TikToker pretends sleeping man on plane is her cheating boyfriend—he calls her out

‘This was a clout-chasing moment gone horribly wrong.'

A woman filmed a man sleeping next to her on a plane and claimed he was her boyfriend who cheated on her. He has since shared on TikTok that he has “no idea who” the woman is.

Posted by Jack (@junderwoogie), the video shows a screengrab of a video posted by @isabellathompson8761. That video shows Jack sleeping next to her on a plane.

“I’ve got no idea what is going on,” @junderwoogie says in his video. “That’s me. I sat next to her on a plane, and she’s made some TikTok saying I’m her ex-boyfriend. No idea who she is.”

“Her video has like 1 mil views combined I feel frauded … what is goin on, she’s blocked me now aswell,” he said in the video’s caption. His video garnered nearly 5 million views.

@junderwoogie Her video has like 1 mil views combined I feel frauded 🤣🤣 what is goin on, she’s blocked me now aswell 😔#fypage #help ♬ original sound – Jack♾

While @isabellathompson8761 deleted the video, he reposted it to his own account. In the video, screengrabs of text exchanges and Grand Theft Auto character emotes are used to tell the story of her allegedly catching her ex-boyfriend cheating on her while on a trip to Amsterdam.

“Charlie isn’t going to be replying to u for a bit coz he’s been chatting to some bird for the past 3 hours,” and incoming message reads.

Then an outgoing message reads: “Charlie you better reply in less than 5 min or I swear I’ll get a fucking flight and catch u myself.”

The TikToker then shows herself at the airport, alleging to have just come from Amsterdam. “When he saw me, he, like, obviously owned up to everything, especially when I showed him the message his friend sent me,” she says. “Let’s just say men aren’t shit.”

She says her boyfriend “begged” her for another chance and told her he would cut his holiday short to fly back with her. “So I said yes, but I’m not because I’m not actually going to give him another chance,” she says. “The second we get back, he is no longer in my life. But at least I can cut his trip short.”

The video then cuts to Jack sleeping on the plane, insinuating he is the cheating boyfriend. According to the screengrab of her video, it had 4,000 likes.

Jack clarified in a comment under one of his videos that he “sat next to her on a plane that I was awake on for about 10 minutes.”

According to @isabellathompson8761’s bio, the TikToker “remade my account.” The only TikToks on the account are apology videos.

“I’m sincerely sorry for the damage I’ve caused and the people I’ve hurt,” text overlay on one reads. “This was a clout chasing moment gone horribly wrong. I do deserve what happened. A lot of you guys are harsh but it makes sense because I did something very wrong but I hope each and every one of you guys can forgive me.”

It is entirely possible the original account was deleted, or its username changed, and another TikToker took its username.

Still, viewers criticized the TikToker in both Jack and @isabellathompson8761’s comments sections for “painting [Jack] as a horrible person.”

The Daily Dot has reached out to @junderwoogie via Instagram direct message and @isabellathompson8761 via TikTok comment.