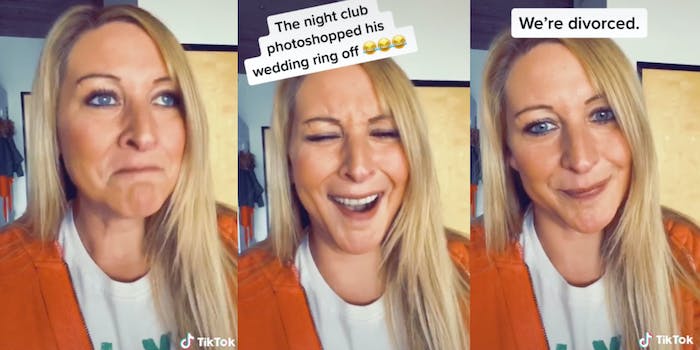 The TikToker says he told her the 'the most ridiculous lie (she’s) ever heard' when she confronted him.

A TikToker went viral for claiming she and her husband got a divorce after noticing a sketchy detail in a Facebook photo posted of him.

And his excuse was probably sketchier than the photo itself. “He tells me that they Photoshopped his ring off,” she says.

The photo and “the most ridiculous lie (she’s) ever heard” apparently prompted a divorce. “They Photoshopped his ring off? Oh, sure they did. We’re divorced,” she says.

After viewers asked the TikToker for a more detailed explanation, she adds that he changed his story.

“After realising he was married to a Photoshop expert, and no nightclub photographer is going to take all that time to Photoshop his ring off, he changes his story,” she says. “He tells me that he must have taken his ring off when he washed his hands, and forgot to put it back on. Huh, what a convenient time to forget to put your ring back on.”

And he came up with yet another excuse after she confronted him with the fact that his cousin also didn’t appear to be wearing his ring in the photo, she says. He told her that the cousin’s ring is black and that it was impossible to see in dim lighting. She later found out the cousin’s ring was silver, not black.

The TikToker’s initial video has garnered over 2 million views. While the video was posted in 2020, it has recently been picked up by various news outlets, prompting a renewed interest in it.

Many users shared their own, similar stories in response and joked about him being “Photoshopped” out of the TikToker’s life.

“Oh my ex husband’s ring fell off in his Instagram stories from work but somehow he found it and put it back on every day before he walked in the door,” one said.

“My ex was on a dating site… his excuse was it was an old profile and dating sites make the accounts of hot people look active to get more people,” another added.

“Girl, you not divorced! He’s just photoshopped out of you life,” a third commented.