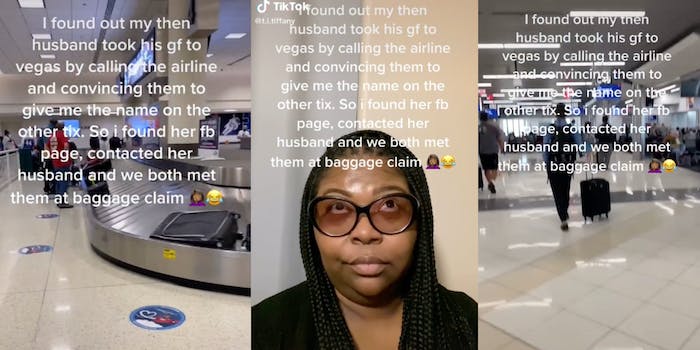 TikToker confronts cheating husband, his girlfriend at airport—and she brought the girlfriend’s husband

TikToker Tiffany Coates, also known as @t.i.tiffany, decided to surprise her husband at the airport as he returned from a trip to Las Vegas.

Only, she wasn’t alone, and her husband wasn’t alone. Her husband was allegedly cheating on her, and he took his girlfriend on the trip to Las Vegas. His girlfriend, on the other hand, was also married. So, Coates decided to track down the girlfriend’s husband and bring him along to confront the duo.

“I found out my then husband took his gf to vegas by calling the airline and convincing them to give me the name on the other tix,” text across Coates’ video read.

She noted that she tracked down the girlfriend’s husband through Facebook.

“We both met them at baggage claim,” the text reads.

Coates also took some footage while at the airport.

In followup videos, Coates noted that they claimed the couple’s luggage themselves “to leave them no other choice but to face us.”

The girlfriend’s husband “went in her bag and saw she had been shopping, and gave me all her stuff she bought,” the TikToker said.

Once the alleged cheaters arrived, the girlfriend and her husband began fighting, but not because of the affair. Instead, the girlfriend was upset that her husband gave away all of the stuff she bought. Coates however was not getting involved. As she rightfully said: “That’s their business! My business was with my husband!”

After all, while far too many people lay all the blame on the woman, it takes two to tango, and as Coates said: “It aint always the other woman fault…”

Meanwhile, Coates said her husband hid from her and even reported her to TSA for stealing his luggage.

Coates said that she filed for a divorce “four months later.”

She finished her TikTok video series with the inspiring message that she’s “single and happy asf!” and reminded everyone that “if you don’t stand for sumn you will fall for anything!”

Coates’ initial video went viral, with nearly 500,000 likes and 1.9 million views since being posted on Sunday. Many viewers are praising Coates’ brilliance, with one noting, “I’m sorry that happened to you. It’s truly an awful feeling, but this is brilliant.”