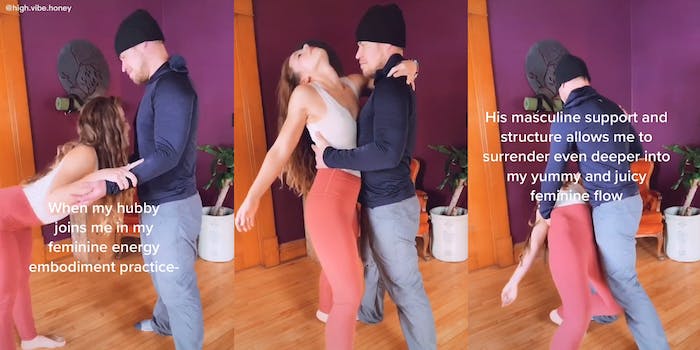 TikToker Jen Weber (@high.vibe.honey) recently uploaded a video of herself and her husband engaging in what she calls “feminine energy embodiment practices.” The video features Weber leaning on her husband for support while she bends, twists, and leans her body backward, with her husband catching her and raising her back up again. However, the caption that Weber placed over the video, saying “His masculine support and structure allows me to surrender even deeper into my yummy and juicy feminine flow,” has proven to be too much for many, raising the question yet again: are the straights OK?

Quite a lot of straight people, it turns out, were quick to respond with a resounding no. No, they are not alright, and thanks for asking.

For some the phrase “yummy and juicy feminine flow” was just too much.

While others were made uncomfortable by what one Twitter user called the “biospiritualism” of it all, tying together spiritual energy and biology to form two binary poles.

The video also prompted some dark humor from the queer population, with Twitter user Jack Saul saying, “It’s fine if they want to do this behind closed doors but there really needs to be some sort of Section 28 for straight people.” Section 28 was a now overturned British law that banned LGBTQ+ people from working in any capacity where they might influence children, and which also banned LGBTQ+ sex and relationship education in British schools.