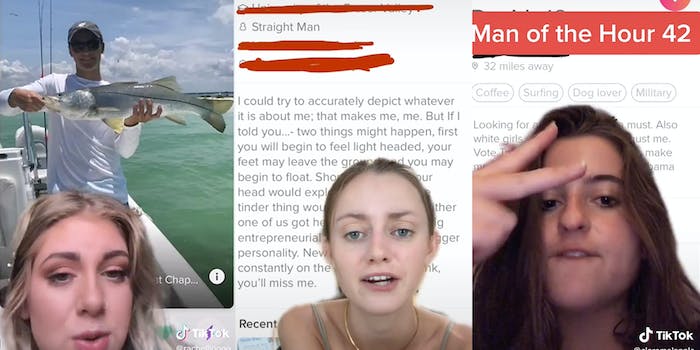 The trend uses an iconic ballad from 'Twilight.'

Following the trend of rating men’s fish pictures on Tinder, women on TikTok are now similarly dragging guys for their poorly stated and downright cringeworthy bios on the popular dating app. A new TikTok trend sees women pulling the worst of the worst of men’s bios from Tinder, and dramatically reading them with emotional music to shine a light on their sexist, dated, and tone-deaf attitudes toward dating.

One 22-year-old TikTok creator, @jasminehaslostit, has led the trend, garnering over 150,000 followers and over 4.5 million total likes in part based on a series of similar videos. She has created over 20 videos putting men on the spot for their bad Tinder bios, often backed by the song “Bella’s Lullaby” by Michele Garruti, which popularly appeared in the notorious teen vampire romance film Twilight. The sound “Bella’s Lullaby” has now been used nearly 20,000 times for original videos on TikTok.

The trend has sparked a plethora of clips created in the same vein, with users sharing the most awkward and embarrassing bios that they’ve come across while swiping left and right through the dating app.

Another trend by user @claramelapple stems from the same format but instead focuses on a single “man of the hour” each day, specifically targeting some of the worst personalities to appear on Tinder, including men who are self-proclaimed cheaters and others who compare women to KFC.