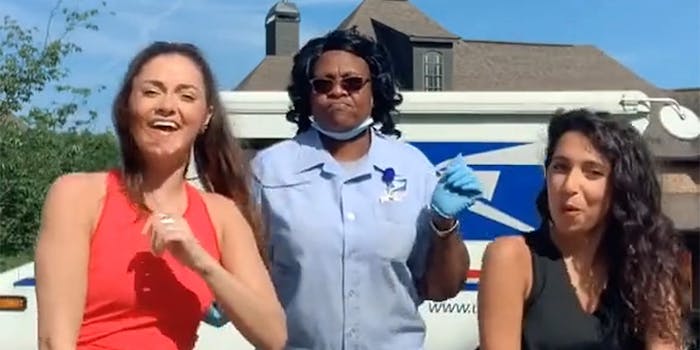 What could have been a TikTok fail turned into a wholesome surprise.

What could have been a TikTok fail turned into a hilarious, wholesome surprise when a United States Postal Service worker accidentally interrupted a video shoot and handled it like a pro.

The USPS employee was driving through Vestavia Hills, Alabama when she entered the camera frame of Alexis Dinga, who had left her phone on top of her mailbox to film a TikTok with her friend Collins Kitchens. When she realized she had interrupted the duo’s TikTok dance, she waved at the camera, let out a hearty laugh, and asked, “How you doin’?”.

Dinga and Kitchens were lucky to have the surprise guest. The video has earned 28.6 million views and 8.4 million likes on TikTok. Many of the 71,000 commenters were big fans of the surprise guest as well, with people commenting things like, “This video made me so freaking happy.”

Dinga was no slouch on the platform in the first place, with several of her recent videos earning tens or hundreds of thousands of views. But the mail worker cameo boosted her account to a whole new level. She even acknowledges it in her TikTok bio: “yeah i owe it all to my mail lady.”

Lucky for fans, Dinga, Kitchens, and the USPS driver all reprised their roles in a follow-up TikTok video. The driver, donning a face mask and gloves, gets between the two friends as they all dance to a rap song. The second video was a huge hit as well, earning more than 6.2 million views and 1.8 million likes.

Dinga and Kitchens also gifted the driver another box of gloves, per her request, so she can continue safely delivering packages—and hopefully making cameos in more viral TikToks along the way.