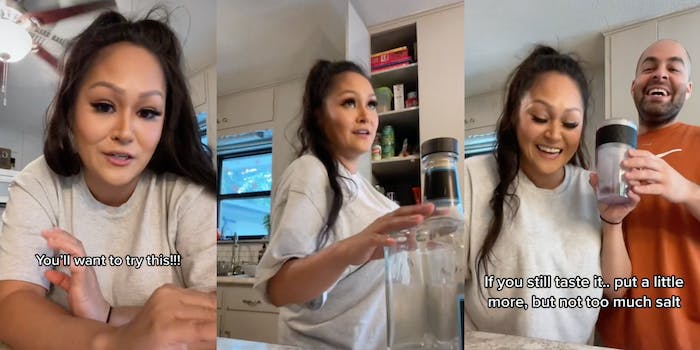 ‘This makes it a little too easy to drink’: TikToker shares hack to make alcohol taste like water in viral video

‘Be careful with this.’

There’s a new TikTok hack going around that purports to take the taste of tequila away completely.

In a now-viral video viewed over 16.8 million times, user @chixy38 showed her audience the hack—which she calls “somewhat, really dangerous.”

“If you drink, or if you like to drink, this makes it a little too easy to drink,” she said.

She proceeds to pour tequila into a cup full of ice; she adds mineral water, a pinch of baking soda, and a dash of salt.

Someone later joins her in the video to take a sip of the drink and confirms it tastes like “nothing.”

“Be careful with this,” @chixy38 warns viewers. “It will taste like water.”

Since her video went viral, other TikTokers have tried to replicate it. But it seems like there are mixed reviews as to whether this hack really works.

One user claims she tried it and it “mostly does taste like water,” but she noted she could still taste the tequila. “I’m also using gold tequila so maybe that’s why,” she added.

Others, though, claim the hack was successful. Folks even tested the mixture with other types of alcohol.

The Daily Dot reached out to the TikToker for comment on her viral tip.