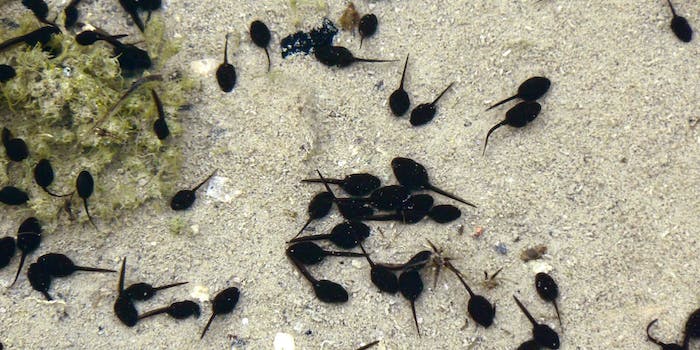 We spoke to the TikTok teen raising 37,000 tadpoles in her backyard

With over half a million followers, these tadpoles are TikTok famous.

Run by 17-year-old Hannah McSorley, @.baby.frogs delivers soothing montages of tadpoles wriggling around in an inflatable pool, nibbling on a curated diet of salad and fish. Featuring educational voiceovers in McSorley’s upbeat Irish accent, the daily updates are an appealing combination of relaxing and bizarre. Like, how on earth did this girl wind up raising 37,927 tadpoles in her backyard?

McSorley’s tadpole census numbers are so amusingly specific that we had to ask. And while we’re sorry to spoil the magic, no: it’s not exactly 37,927 tadpoles. “That’s the million dollar question,” she told the Daily Dot. “I started counting at one and ended up at 37,000. I probably skipped a few, and I just like to call it a very generous estimate.” You can forgive the artistic license; it’s still a hell of a lot of tadpoles.

While mass tadpole farming is the polar opposite of a popular hobby, McSorley’s motives feel very familiar. Like many people, her life has been disrupted by the Covid-19 lockdown, and she decided to start a project to keep herself busy. Living in the countryside, she has fond memories of raising tadpoles as a child. Now was the perfect time to try again on a grander scale. Beginning with a jar of frogspawn she collected while hiking with her brother, she started raising them in plastic tubs in her garden.

You can tell from McSorley’s TikToks that she’s a bona fide tadpole expert. Each developmental stage is carefully documented, and you can see how much work goes into keeping the babies healthy. She also has a well-informed exit strategy for when the tadpoles actually grow up: “Realistically, there will not be 37,000 frogs.”

“I’ve had a few people concerned about the local environment, and to address that, I have two points,” she said. “First of all, it will not be this mass exodus, like a biblical plague of frogs that some people are expecting.” Most of the tadpoles will die off before adulthood, which is why frogs lay so many eggs in the first place.

“I care a lot about the environment, and have actually done heaps of research, read loads of studies about frogs,” she continued. Plus, her local area had abnormally dry weather this year, meaning most of the natural tadpole sources have dried up. When McSorley’s frogs are grown, she plans to release them in batches into various streams and ponds around the neighboring countryside, which hopefully won’t overwhelm the local ecosystem.

“I am just amazed at the interest people have in frogspawn and tadpoles,” added McSorley, who now has over half a million followers on TikTok, eagerly waiting on the next daily tadpole update.