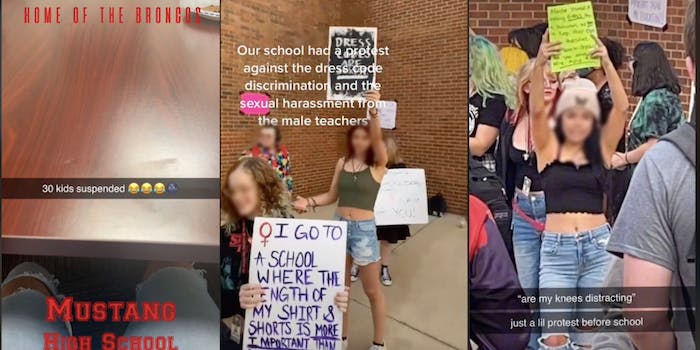 In a viral TikTok posted by @777jadeee on Sept. 10, high school students protest against the dress code and alleged sexual harassment from male teachers.

The video shows students outside of Mustang High School in Yukon, Oklahoma, holding signs that say “My body is not a distraction” and  “Dress codes are sexist.”

The protest led to 30 kids, including the creator of the video, allegedly being suspended. One of the video clips allegedly shows an administrator telling one of the protesters, “You know what, Paige? Shame on you. You know how many times I tried to help you, my mistake.”

The TikTok is captioned, ​”They took and ripped our posters after telling us we would get them back” and has received over 800,000 views.

According to the Mustang High School student handbook, “Interpretation of questionable attire will be at the principal’s discretion. Violations may result in disciplinary action.”

In a Facebook statement allegedly posted by Paige Gulley, she claims that Assistant Principal Cody Little stopped her in the hallway and asked her, “Do you have something to cover THAT up?” while gesturing toward her chest.

Gulley says that many other female students have experienced harassment and assault from male teachers and administrators. Her statement also alleges that Principal Kathy Knowles was the administrator reprimanding her in the TikTok.

In the post, Gulley states that she and her mother are pursuing legal action against Mustang High School.

Commenters on the TikTok were supportive of the high schoolers and their protest.

“They would rather suspend 30 girls [than] deal with the issue at hand,” one commenter, @olvera3420, wrote.

The Daily Dot reached out to @777jadeee and Gulley via TikTok and emailed Knowles for comment.

Update 4:28pm CT, Sept. 29: In an emailed statement to the Daily Dot, Mustang Public Schools acknowledged the protest held before school on Sept. 10 and said some students “violated the student code of conduct” by continuing to protest after class. The school district cited student privacy laws and said it could not share the specific details about individual cases.

The school district also said it is “aware of several accusations that have been made on a subsequent social media post” but would not share more information due to an ongoing investigation.

“We do encourage students to reach out to a trusted adult in the school system to report any issues that they may be experiencing; we are here to help,” the district’s statement said. “As always, our focus will always remain on the academic and social well-being of our students.”