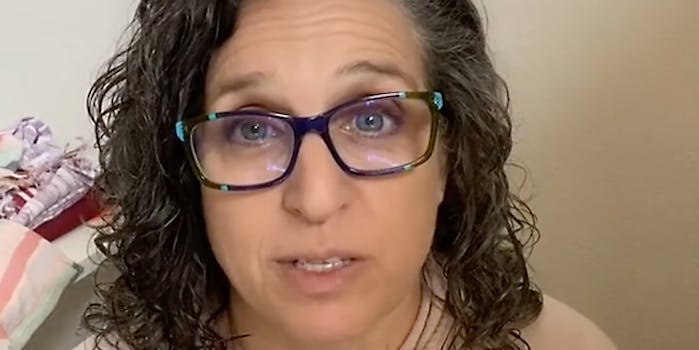 The former professor got on TikTok because she wanted to laugh. Now she's debunking bad science.

There’s no shortage of scientists, researchers, and doctors using TikTok to debunk vaccine misinfo. But then there’s the strain of content that’s purposely meant to confuse and enrage, and therefore get more views, like the account that recently claimed “vaccine bandits” were jabbing unsuspecting people in Los Angeles. The creator later told the Daily Dot the video was meant to be “intentionally ridiculous,” but the thought had already taken hold.

How can good info get through the noise? It’s all about how you present it on TikTok. Tracy, who posts under scitimewithtracy, is one example. She has a Ph.D in microbiology and has worked as a scientist and senior lecturer; she joined TikTok because she “made a resolution in 2020 that I wanted to laugh every day.”

In November 2020, she says she posted a stat about the percentage of people who said they were willing to get a COVID vaccine, and realized from the comment section that “it was very, very clear that people just didn’t understand the underlying biology, just did not have a good sense of how cells worked, how molecules worked, how viruses worked.”

In her early videos, she broke down the mechanics of the vaccine and immunity in a way that’s easy to understand. But more recently, Tracy, who prefers to only go by her first name, employed a rapid-fire debunk approach to address TikTok accounts spreading bad info. One series was posted to Twitter and blew up last week. The initial video has more than 5 million views.

Tracy says the issue with presentations like the one she debunked (the account is now private) is that people “Will say some true things and some not true things, and that’s when misinformation gets packaged into something that’s credible. And that’s the hardest thing for us to sort of combat.”

Despite the company vowing to take measures to combat vaccine and COVID misinfo, it’s still rampant on TikTok. Last month, a study on how the app spreads vaccine disinformation revealed that audio from one now-deleted anti-vaccine TikTok posted in December was viewed more than 16 million times and used in more than 4,500 videos.

“Perhaps most concerning is that some of the most-viewed videos using this Sound appear to come from healthcare workers,” wrote lead author Ciaran O’Connor. The study also found that anti-vaccine videos are being targeted to the Black community.

TikTok also has a massive base of teenage users, some of whom might not be as concerned about the vaccine, but are still at risk with the Delta variant. We’re now witnessing the real-world effect of them seeing and repeating vaccine misinfo they get from TikTok.

Other accounts, like dr.noc and epidemiologistkat, have gained followings for combatting COVID misinfo with a more meme-based approach. Tracy’s approach is more straightforward, but she is also patient, which goes a long way. (That doesn’t mean people haven’t reported her content. She says she hasn’t violated any guidelines, but that people are getting “angrier, and more desperate, and more vicious in their attacks.”)

Tracy says she’s not trying to change everyone’s minds, but rather give them info to make a “more informed decision.”