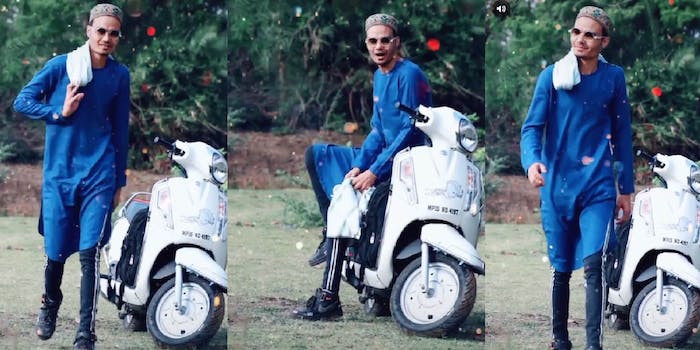 He claimed that only Allah can protect people against the deadly virus, not a piece of cloth.

A TikTok user, with nearly 100,000 followers, mocked the idea of wearing face masks to help mitigate the novel coronavirus. He is reportedly now the first person in his area to test positive for it.

In a video, Samir Khan, who lives in India, claims that only Allah can protect people against the deadly virus, not a piece of cloth, according to ABP Live. He later uploaded a video from the isolation ward in a hospital, telling viewers of his diagnosis and urging them to pray for him, according to filmibeat. He reportedly said that he will also be taking a break from TikTok while he recovers.

The coronavirus has so far killed more than 100,000 people globally and infected more than 1.7 million others. People are being urged to wear face masks in public to help slow the virus’ spread. India is reportedly making face masks mandatory for more than 300 million people, and those who refuse to wear them could face up to six months in prison.

The Centers for Disease Control and Prevention (CDC) outlines how to make both a sew and no-sew cloth face covering. Presymptomatic and asymptomatic carriers can unknowingly spread the virus, which is believed to be transmitted mainly through coughs, sneezes, and other respiratory droplets. Masks that cover the mouths and noses of the wearers best protect those around them. So, if everyone wears a mask, then everyone is doing their best to protect one another.