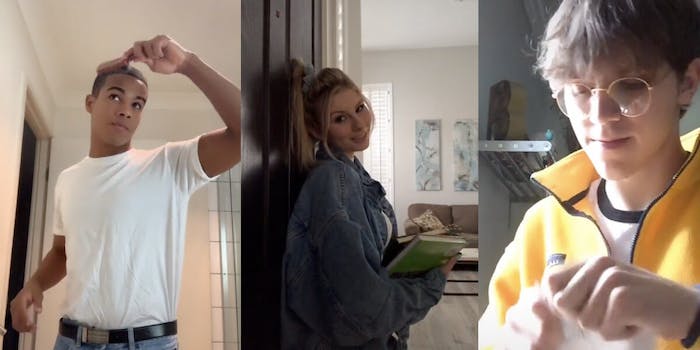 Now everyone can be in their own John Hughes flick.

“I was born in the wrong decade.”

It’s a sentence uttered by just about everyone at some point in their life, whether they believe it or not. And the age of the internet has allowed us to live in the throes of nostalgia more than ever before. From ‘80s movies to ‘70s music to ‘60s makeup tutorials on YouTube — everything is easily accessible and constantly mined for both memories and pathways to new content.

And TikTok teens have developed a new form of transporting themselves back to the decades of the past. The Not My Generation meme sees users roleplaying scenarios from previous generations in a series of POV vids all set to the song “New Flesh” by Current Joys.

“The year is 1984 and your abusive dad left you a note on your biggest day,” user @weirdfl3x wrote, beginning the trend. Dressed in some dorky glasses and an oversized yellow coat, he rips up an encouraging note as the bittersweet synth transports the viewer back into the B-plot of a John Hughes movie.

Soon everyone wanted in on the time travel, and other TikTokers began posting their own before-we-were-actually-born scenes.

Teen romcoms are probably the most prominent impression post-GenX kids have of the 1980s/early ’90s, and a number of the vids fit right into that genre.

But as prominent as the ’80s romcom vids are, some TikTokers wanted to try exploring a time further back, with some even throwing a history lesson or two into the mix.

Though some just stuck to the high school hormones theme, only a few decades earlier.

But no matter what decade you’re in, there’s always a room for a little extra creativity.

Of course, there are plenty of anachronisms in these journeys to the past, but perhaps the most hilarious one is the fact that the soundtrack, meant to be reminiscent of the past, is a song that wasn’t actually released until 2013.