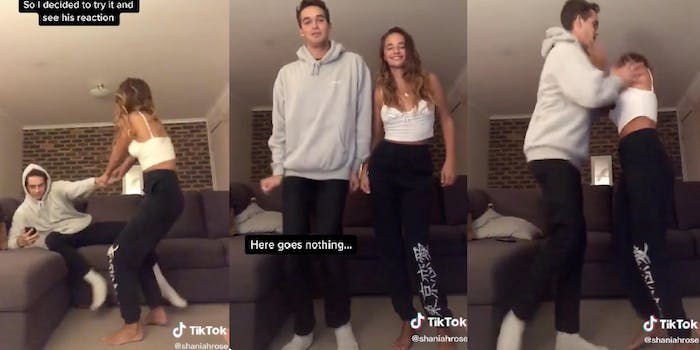 One of the latest trends to circulate on TikTok is the “kissing your best friend challenge.” It looks like many TikTokers may have secret feelings for their best friend, so this challenge is an opportunity for them to shoot their shot.

Many attempts just ended in confusion from people who didn’t see the kiss coming.

But some did have happy endings and new relationships started.

But one girl was rejected on a whole new level when she attempted to kiss her best friend.

TikTok user Shaniah Antrobus, @shaniahrose, tried the challenge with her best friend, Josh Pulford, who she says she’s known for 13 years. Antrobus says she’s had a crush on Pulford for the past five years, so she decided to just go for it and kiss him.

Antrobus pretended to film a dance with Pulford to distract him. In the middle of their dance, Antrobus went in for the kiss, and Pulford pushed her away right onto the couch behind them.

Antrobus may have been a little embarrassed, but it appears there were no hard feelings. The two finished their TikTok and posted it the next day.

But Antrobus’ TikTok started circulating on social media and viewers were embarrassed on behalf of Antrobus over Pulford’s reaction.

“This is why we don’t shoot our shots,” one Twitter user said.

Some viewers said there were “mixed signals” based on previous TikToks of the two.

Some thought the trend itself was harmful, even calling it “sexual misconduct.”

Antrobus was hardly the first TikToker to get rejected during this trend.


Antrobus also filmed a follow-up video and said she wasn’t hurt during the TikTok, and Pulford apologized for “yeeting her across the couch.”

She also uploaded part of her conversation with Pulford after their kiss. Antrobus said she uploaded the video as a joke, and Pulford said he was “shocked” and loves her but just as a friend.