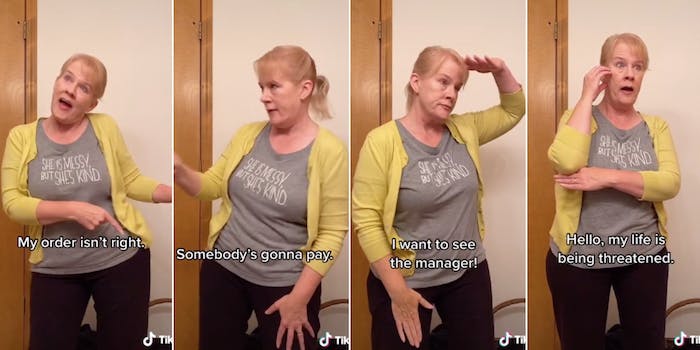 'The only Karen allowed on TikTok.'

TikTok has proven to be an incredibly versatile platform, making space for cooking videos, social justice PSAs, and dance challenges. One TikToker captured the zeitgeist yesterday with a new viral dance video dedicated to all the Karens of the world.

Tennessee Tonya (@tn_tonya) posted her Karen tribute on Sunday, which she says was “inspired by some of the most high profile women in my culture.” To the tune of Eric Prydz’s “Call on Me,” Tonya works through a number of delightfully nerdy dance moves, each corresponding with a different Karen-ism. “The Karen” includes routines for “My order isn’t right,” “Somebody’s gonna pay,” and, obviously, “I want to see the manager!”

Tonya’s outfit for The Karen—a yellow cardigan and a “She is messy, but she is kind” shirt—is spot-on as well. It’s unclear whether she wore the outfit just for the video, but it’s a nice touch all the same.

Tonya’s Karen dance was an immediate smash. In roughly one day, it’s already accumulated 3.2 million views and 858,000 likes, way above the 15,000-25,000 views she’s averaged on other recent videos. People seem to love the dance. One user said Tonya is, “the only Karen allowed on TikTok.”

Given the onslaught of Karens Karen-ing over the last few months, Tonya could have probably turned her dance into a feature-length performance. But she cut The Karen mercifully short with a sentiment that plenty of viewers can support: “Random dance moves because I don’t like to acknowledge temper tantrums.”