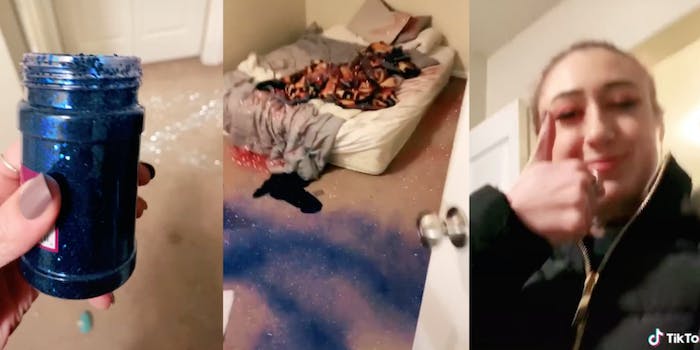 The video is aptly set to Carrie Underwood's 'Before He Cheats.'

TikTok user @hollynicoleeee_ posted a video on Monday in which she throws glitter on seemingly everything he owns. The video is aptly set to Carrie Underwood’s 2005 scorned woman bop “Before He Cheats,” which contains the lyrics: “I dug my key into the side of his pretty little souped-up four-wheel drive.”

And she means everything. In the video, the TikToker throws glitter in his bedroom, bathroom, living room, and in his shoes.

The video has been viewed over 16 times, liked 2.9 times, and drawn in a bevy of comments—most of which are in support of the TikToker.

“I love this because she didn’t actually go all dramatic and destroy anything but she made life difficult still,” one commenter said.

Others encouraged her to take it a step further and “put it in his shampoo and conditioner” or “on his ceiling fan.”

However, some viewers are calling the stunt “toxic” and “childish.”

“Can we please stop normalizing this stuff?” another commented. “Walk away and love yourself. Let’s be good people.”

The top comment on the video asks for an “update” on the situation, and @hollynicoleeee_ obliged. In a series of updates, @hollynicoleeee_ shared how her ex responded, and it appears as if he agrees with some of the commenters. “That’s childish as f*ck,” he said in a message.

“So is ghosting me and not giving back my things,” @hollynicoleeee_ replied. “And sleeping with [redacted] and I at the same time.”

The ex also let her know that his brother is “pissed” because it’s “technically” his apartment, not the ex’s, leading many to further criticize the TikToker. “You shouldn’t have put glitter in his brother’s apartment,” one said.

“I can’t stand behind you on this one anymore,” another said after seeing the messages.