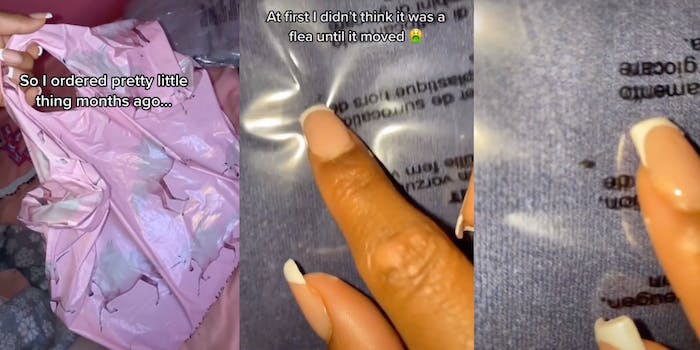 'It comes with flea shipping.'

A TikToker put a popular fast fashion brand on blast for shipping out its clothes with a little something extra inside: fleas.

The viral video only exposes Pretty Little Thing, a U.K.-based retailer that puts out trendy attire aimed at young adults. People in the comments soon identified several other guilty brands, however, including Shein and Romwe.

TikToker @amberogunsanya, whose bio says she “likes to unbox stuff,” treated the video like a typical unboxing with an unfortunate twist. She says in the caption that she ordered the package months ago, and while she was waiting for it to arrive, she began hearing rumors about buggy packages. So when it finally showed up, she approached with caution.

Tossing the unopened bag on her bed, @amberogunsanya takes a pair of scissors to the side of the shipping package. She then produces several smaller packaged items, including what appears to be a pair of sweatpants. She pulls the item out, rotates it, and identifies a small, many-legged black dot trapped beneath the plastic. When she prods it with her nail, the bug begins to squirm.

People were horrified to see proof of the persistent flea rumor. A goldmine of flea jokes soon overtook anyone questioning the video’s authenticity or gagging over the sight of a flea.

“It comes with flea shipping,” a top comments reads.

“Buy one get one flea,” another user joked. One person suggested the company should change its name to “pretty little flea.”

Some commenters questioned whether the bug was, in fact, a flea. People pointed to a few other possibilities, including bed bugs, but were no less disturbed by the tiny critter’s presence in a sealed package.

Many people said Pretty Little Thing has been working hard to deny any claims of fleas in its packaging. One user claimed that the company accused her of lying when she discovered fleas in her own package. Another user pointed out that Pretty Little Thing supposedly addressed concerns of a flea infestation in its warehouse more than a month ago.

“The fact they said that they investigated their warehouse and found nothing and said that the customers are basically lying. I can’t,” they wrote.

Pretty Little Thing did respond to concerns of a flea infestation several weeks ago, the Sun reports. “As soon as recent ‘bugs in packages’ allegations came to light we immediately launched an investigation,” a company spokesperson told the publication. “This included an inspection by a 3rd party pest control review of our warehouse, we can confirm that we have found no evidence to support the claims being made.”

“We are extremely proud of our warehouse and the teams who maintain them and we hope that the information provided has addressed the concerns that have been raised,” they continued.