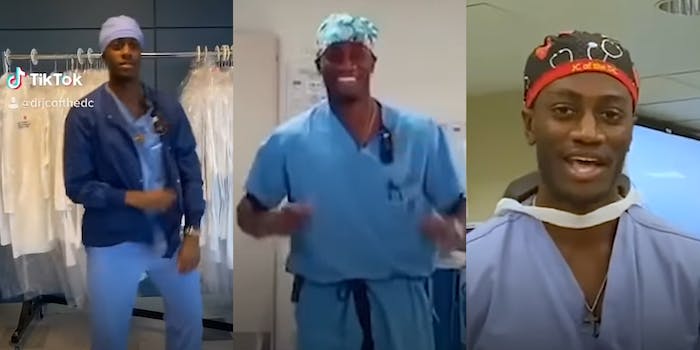 A doctor known for his TikTok dances has been accused of sexual assault by a former colleague.

Jason Campbell is named in a $45-million lawsuit that alleges he was inappropriate with a co-worker at the Veteran Affairs Medical Center in Portland, Oregon, where Campbell was sometimes an anesthesia resident.

In the lawsuit, obtained by the Oregonian, Campbell, who primarily worked at Oregon Health & Science University, is accused of sending the plaintiff harassing and unwanted texts, social media messages, and “pornographic photos,” starting in January 2020. In March 2020, it’s alleged Campbell snuck up behind her in her office and “pushed his body and his erection forcibly onto plaintiff’s backside.”

The plaintiff asked to remain anonymous, after “she faced retaliation and vandalism after reporting Dr. Campbell’s assault to OHSU,” according to the suit. After reporting Campbell in April 2020, she was told she wasn’t the first woman to make a complaint about him.

Campbell now reportedly resides in Florida, and his TikTok account has been made private, but he drew in followers and views last year when he started posting uplifting dances during the first wave of COVID—around the same time he was allegedly engaging in inappropriate behavior at work. He became known as the “TikTok Doc” and was featured on Good Morning America.

The suit alleges that OHSU has a history of protecting those accused of inappropriate behavior, and flouting Title IX’s mandatory reporting requirements. Dr. Lalena Yarris, the Residency Program Director at OHSU, appeared in one of Campbell’s TikToks in March 2020. The plaintiff provided Yarris written documentation of Campbell’s misconduct after that video but claims she never took action.

Campbell has not publicly responded to the lawsuit. OHSU’s spokesperson Tamara Hargens-Bradley told the Oregonian: “OHSU does not condone behavior as described in the lawsuit. We are continuously working to evolve our culture, policies and practices to provide an environment where all learners, employees, patients and visitors feel safe and welcome.”